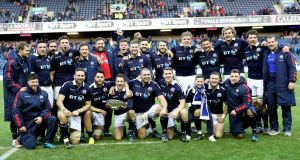 15 Stuart Hogg
Man-of-the-match for his two-try contribution but given the freedom of the outside channels to operate in and Ireland paid the price: superb acceleration and typically livewire.
Rating: 8

14 Sean Maitland
Two try saving interventions, the first in intercepting Jamie Heaslip’s pass to Robbie Henshaw and the second in forcing Rob Kearney to put a toe in touch.
Rating: 7

13 Huw Jones
He started the game well enough with some nice touches but when Ringrose rushed up in the second half he forced the South African based player into errors.
Rating: 5

12 Alex Dunbar
When he retires his lineout stats will read: Lineouts (won one, lost none). A wonderful clever move for the try while his tackling in defence was outstanding. Rating: 7

11 Tommy Seymour
He’ll probably be a little disappointed not to have intercepted Zebo’s pass to Earls but his covering was good and he caused Ireland the odd anxious moment going the other way.
Rating: 6.

10 Finn Russell
His game management was excellent in identifying the space and he got the ball out there quickly and accurately.
Rating 7.

9 Greig Laidlaw
A flawless kicking display ultimately took his team past the finishing post. Typically spiky, he organised his pack with authority.
Rating: 7.

1 Allan Dell
He conceded two early penalties in the scrum where he was in real trouble but on the plus side of the ledger his tackling was aggressive and hard-hitting.
Rating: 4.

2 Fraser Brown
He had his issues out of touch, conceding two scrums for crooked throws. He carried and hit hard before eventually being replaced for a second and last time having initially gone off with a blood injury.
Rating: 5

3 Zander Fagerson
A mixed afternoon in conceding two penalties but he made a prodigious 15 tackles and several that forced the ball carrier backwards.
Rating: 6

4 Jonny Gray
He carried more ball (14) than any other Scottish player and made a staggering 28 tackles, a phenomenal effort even by his hugely impressively standards. Rating: 8

5 Richie Gray
He won the majority of Scotland’s lineout ball, proved a real thorn on the Irish throw, was the second highest carrier (13) to his brother and made just the 17 tackles.
Rating: 7

6 Ryan Wilson
Another of Scotland’s standout players with a tackle-count of 18, including one or two telling interventions; he also gave his side an option out of touch.
Rating: 7

7 Hamish Watson
It was a staggering effort from the 24-year-old flanker who gave Ireland a heap of trouble at the breakdown and racked up 16 tackles in the 50-minutes he was on the pitch.
Rating: 7

8 Josh Strauss
He was not nearly as effective as his two backrow teammates but he did chip in with the ball carrying duties and also worked hard in defence.
Rating: 6.

Replacements: Ross Ford, John Barclay and Mark Bennett all positively contributed on their arrival with flanker Barclay the pick with one crucial read at an Ireland lineout close to the Scottish line. Rating: 7.

Coach: Vern Cotter got the victory he craved over his old Clermont mate in his final season as coach. He got the tactics right and the team exploited the space out wide while the lineout move was a doozy. Rating: 8.