Injured O’Connell agrees to request to remain on with Lions 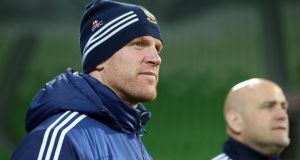 Paul O’Connell has been asked to remain on with the Lions for the remainder of the tour. Photograph: Inpho

It is a measure of his contribution to date, both on and off the pitch, that Paul O’Connell has been asked to remain on with the Lions for the remainder of the tour, and it is a measure of his desire to see the tourists complete a first series win in 16 years that he has agreed to do so.

O’Connell will thus remain with his fiancé Emily, their son Paddy and his parents, and continue contributing in the team room and on the training ground after being a contender for the Lions’ best forward on this tour to date and notably in last Saturday’s first Test win.

As a three-time tourist who gave everything of himself emotionally, mentally and physically to that effort as captain four years ago in South Africa, he has revelled without that onerous responsibility this time, speaking only when he felt a need to as a strictly supportive but hugely helpful lieutenant to Sam Warburton, while envying the latter’s more easygoing approach to the job.

And he is motivated to remain with the squad because of a huge desire to make this a valedictory tour.

“I don’t think he’ll be here in four years’ time and having played such an important role in the first Test he was given the option of staying or going home and he wanted to stay with the squad,” said Warren Gatland after yesterday’s 35-0 win over the Melbourne Rebels.

“It will be fantastic if we can win the series. I know a lot of players that have been around for a while and hadn’t had a lot of success in the Southern Hemisphere. He’s one of those who’s desperate to do it.

“I feel really sorry for him. It’s a big loss for him, a big loss for the team,” admitted Gatland who, along with the rest of the management, may even have been a little surprised by his level of performance after being written out of consideration until that barnstorming Heineken Cup quarter-final away to Harlequins.

“I think he’s played some of the best rugby I’ve seen him play in a long, long time. He’s in great shape. The combination of him and Alun Wyn Jones was proving to be really strong.

“He’s been around for such a long time that he’s got the experience and wisdom to be able to have an input. I’m sure he’ll be involved in some aspect.”

Approach
Gatland refuted the idea that the ensuing change will alter the Lions’ approach, with Geoff Parling certain to step into the number five jersey as Jones’ partner.

Both Richie Gray and Ian Evans figured prominently in the win over the Rebels, with the Lions head coach dropping a strong hint that the Scot may win the nod to be on the bench when describing Gray’s performance as “his best game on tour”.

The Lions head coach effectively admitted that Saturday’s second Test across the Yarra River in the Etihad Stadium may come too soon for loose-head Alex Corbisiero and the recuperating centre Jamie Roberts, which means Mako Vunipola will be the other enforced change in the pack.

It appeared that Dan Lydiate and Seán O’Brien were being trialled last night to inject more ballast into the back-row, all the more so as the opposition persistently afford Lions virtually uncontested ball from the front. That said, they went to the tail more last night. They were also the two backrowers taken off around the hour mark.

Lydiate, captain for the night, did his thing, and led an impressive defensive effort which yielded not a point and pleased Gatland no end, and saw him lead the tackle count, as ever, with 15.

Given how hard the Wallabies are likely to come at the Lions on Saturday, a horses-for-courses policy could see Lydiate promoted from the bench to the starting line-up.

O’Brien was one of five try -scorers who strained every sinew and played well without making any big busts. With George Smith possibly being promoted to the Wallabies’ bench, this could help force the Lions’ hand, for O’Brien would give them similar cover. It could even be that Tom Croft remains in the match day squad as cover for the back five.

As for the backs, Tommy Bowe should return, presuming he’s fully fit, in place of Alex Cuthbert. The latter could even miss out on the bench, given the robust return to fitness and form of Manu Tuilagi against the Rebels as the likeliest line buster, but Cuthbert would seem to add more balance.

Intriguingly, Gatland raised the prospect of a change at scrumhalf when admitting: “The hard thing for Mike Phillips is that he’s had that knee which has been troubling him all tour. We’ve been very pleased with Conor Murray; I thought he had another good game today.

“Ben Youngs didn’t give the greatest performance against the Brumbies, but he was good coming off the bench tonight. We’ve got different nines who have all added to the squad and who are all real quality. It gives us a nice choice in terms of who we start with and who sits on the bench at the weekend.”

Key men
Yet it’s hard to envisage Phillips, one of Gatland’s favourite players and one of the Lions’ key men, being jettisoned.

All will be confirmed tomorrow, as will Robbie Deans’ selection, which may not be anything like as radically altered as first envisaged after three of his backs were stretchered off and a fourth departed before the end last Saturday.

The pack may well be unchanged, and having spent so much of their build-up with James O’Connor as outhalf, to change now would be a radical move, all the more so as the alternative, Kurtley Beale, can now be accommodated at full-back for the concussed Berrick Barnes.

With Christian Leali’ifano expected to recover from his concussion, and the redoubtable Adam Ashley Cooper, who has played 76 of the Wallabies last 83 matches, having trained yesterday, it’s possible the only other change will be on the left wing, with Joe Timone coming in.