If we let Professor Schmidt loose on Irish Water, he’d soon turn it into wine 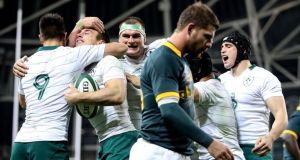 No not a quote from a night out with Joe Schmidt, but part of a study conducted by the Physics Department at the University of Sydney. As you might imagine, it goes on a bit and in the end it results in dizziness and confusion, as if you’ve received a smack from Bakkies Botha.

A nice start then against the Boks,but as the fella says (whoever he is), no prizes are handed out in November. There is a nice one being handed out next October though.

Indeed next year’s World Cup will mark 20 years of professional rugby. It’s hard to believe 19 years have passed since the so-called innocent amateur days, when the notion of being paid to play rugby, would’ve been about as likely as, well . . . paying for water. Ouch!

We might now take professional application for granted, but this business of winning most of the time takes a bit of getting used to. The Ireland coach’s methodical planning, laser-eye and meticulous execution is a far cry from the “give it a lash” days of the late great Mick Doyle and his 1985 Triple Crown winning ways. Indeed the only similarity between then and now is the shape of the ball and even that’s different. (More oval apparently. Just ask Joe ).

“Give. It. A. Lash. Mmm . . . interesting, but y’know I think I’d prefer to implement our defensive system, deploy our offensive outlets and secure clean, quick possession in order for our second 5/8th to maximise possession, territorial dominance and separation on the scoreboard.”

No matter the era, the euphoria of a big Ireland win should set off alarm bells as it’s usually the sign that defeat is imminent, but somehow this feels different, and no international coach will relish meeting Professor Schmidt’s team. It’s quite hard to find a negative in all this, but being Irish one is compelled to have a go with the assertion that Irish rugby’s biggest problem would appear to be how the heck to hold onto him. Of course it’s not just his attention to detail, it’s the way he delivers it, the disarming transparency along with an apparent decency. Two qualities which immediately set him apart.

The truth is though Schmidt is destroying the ancient Irish tradition of piling into the pub after a match and giving out hell about how appalling everything is. Before he came along the whole night could be spent ripping into all around with uninhibited negativity after another dreadful display. All the contaminated bile mustered would be legitimately aimed at the Ireland team back then. Well not now, thanks Joe, those days are certainly gone.

Naturally luck also plays a part, although he’s probably developing a game-changing system to limit its influence. That said he’d be hard pressed to second-guess the inner-workings of the unique Romain Poite. The binning of blond-bombshell Adriaan Strauss seemed a little harsh, but possibly in the mind of Poite, if you bear even a passing resemblance to Angela Merkel crossed with an Oompa-Loompa you’ve got to expect the worst.

In his post-match interview, a fidgety, intense Springbok coach Heineke Meyer was extremely complimentary to Ireland and seemed overly-keen to repeat “they were the better side” on several occasions. His way of delivering compliments with an implicit threat is quite a trick, but you couldn’t help thinking he was bursting to run off somewhere for a private bout of manic, fist-pumping.

The word “Georgia” might send shivers through those who remember them being a blade of grass away from ending Ireland’s World Cup in 2007. It might have done us all a favour if they had as the squirming from the stands was only prolonged. Given the inevitable low after the high of last weekend and a sprinkling of less experienced starters this weekend, Georgia represent a slippery banana skin, but you suspect Joe has solved that particular equation.

One conundrum I’d like an answer to: why isn’t left-footed Rob Kearney, deployed to take the penalty punts close to the right touch-line where he would get more distance than Johnny Sexton’s right? We’re always told it’s a game of inches so let’s take all we can.

And while he’s pondering that he might consider taking over the running of our banks, church, RTÉ and Irish Water. Although he’d probably just get distracted turning that into wine.

1 Gordon D’Arcy: Change has to happen before Ireland's trip to Paris
2 Zinedine Zidane tests perfect record against old friend Guardiola
3 Out of Bounds: Patrick Reed helping make the ‘C’ word less taboo
4 Kevin Seaward: ‘The first time I wore the Vaporflys, I hated them’
5 Gerry Thornley: Wild reactions to this Ireland team as fickle as the wind
Real news has value SUBSCRIBE