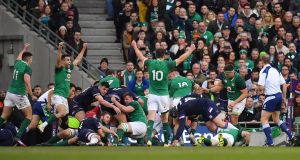 Ireland players celebrate after Sean Cronin scored their side’s fourth try during the victory over Scotland at the Aviva Stadium. Photograph: Brendan Moran/Sportsfile via Getty Images

All roads lead to Twickenham now alright. History beckons, and so too a form of rugby immortality.

For the first time ever, an Irish squad will travel to Twickenham seeking a third Grand Slam in history after securing a third Six Nations in five years. Throw in St Patrick’s Day and, well, Don King couldn’t have been scripted this one any better.

Coming after Ireland’s unrelenting 28-8 win over Scotland, a third bonus point home win in a row, that France actually beat England leaves no room for argument. Bonus points ultimately didn’t matter. There can be no bleating from any quarters about that. This Irish squad have earned the right to be called champions and earned a shot at the altogether bigger prize.

As Joe Schmidt said on Saturday night: “This is just us against them”. He added: “I think there is a degree of certainty around that and it means you can focus on yourself a bit more. They know we are coming and they are going to be ready for us.

“We’ve got to get over there and hit our ‘A’ game right from the start, because there’s going to be an extraordinary resolve amongst that English contingent after those two away losses. For a team that had lost one game in 25 to suddenly be 27 games and be on the back of back-to-back losses, that is going to make them incredibly keen to make sure that they deny us what we denied them last year.”

Indeed, the shoe is on the other foot now, and having denied England a Slam at Lansdowne Road in 2001, 2011 and last year, Ireland will appreciate full well how motivated England will be.

So across the board, you know how tough that is going to be. They’re wounded, but they’re far from dead and buried

“I think they’re going to be really dangerous,” said Schmidt. “The personnel that they have – I’ve seen them play often enough – I actually watched them train with the Lions and they have an exceptional level. They have extreme pace, Anthony Watson, Jonathan Joseph, Jonny May. They have players that have that sort of speed; they have great experience in their halves with Danny Care, the amount of caps he’s got and the same with George Ford and Owen Farrell.

“Up front, the real experience they have. I don’t know if Dylan Hartley will be back but Jamie George deputising for him today, you know that he’s a fantastic player and was in the Lions being selected as a top-quality starting player. So across the board, you know how tough that is going to be. They’re wounded, but they’re far from dead and buried.

“They’ll have a really resilient resolve to come back, bounce back and beat us next week.”

Clinical again, for the fourth game running Ireland achieved over 60 per cent of possession and territory, and so preserved their own unbeaten home record in the Championship over five seasons and 15 games under Schmidt. Ireland also travel to London having displaced England at number two in the world rankings following the weekend’s results, and with real momentum after extending their Irish record of successive wins to 11.

That a core of the squad have sealed a third title in five years gives Schmidt belief that he has the players to emulate the icons of 2009.

“I think by pure evidence of performance and results, I think you’d have to say so. Three in five years, there are some very consistent personnel during that period – Rory Best, Peter O’Mahony, Jonathan Sexton, Devin Toner, Cian Healy and Jack McGrath. There’s Conor Murray and Johnny Sexton obviously, they have been incredibly consistent through it, and so has Rob Kearney. ”

Schmidt also singled out Keith Earls, who was an unused sub in Munster’s 2008 Heineken Cup triumph, just missed out the 2009 Slam and was injured for the 2014 and 2015 titles through injury.

“It’s fantastic for him to grab what he really deserves as well, and then there’s this young crew. James Ryan doesn’t know what it’s like to lose a Six Nations. There’s kids like that who need to understand what Johnny [Sexton] said. They need to understand that this doesn’t happen very often. This is incredibly tough to do and the opportunity that exists next week is really precious.”

Following on from Sean O’Brien’s cruel shoulder injury 25 minutes into his comeback for Leinster away to the Scarlets on Friday night, the only real concern on Saturday was the sight of Garry Ringrose limping at the end, having injured the right ankle which recently required an operation. But the word is that he should be fine.

As ever, Jacob Stockdale seized his moments again, taking his tally to ten tries in eight Tests. He must think this international rugby is a lark. In registering his sixth try of the Championship, he eclipsed Tommy Bowe (2012), Brian O’Driscoll (2009) and Jack Arigho (1928) as Ireland’s record try scorer in the Championship.

Stockdale also became the first player to score more than one try in three successive Championship games since England’s Cyril Lowe in 1914, and he’s now within two tries of equalling the all-time record achieved by Lowe that year and Scotlnd’s Iain Smith in 1925.

Like James Ryan (seven wins in seven Tests) and Dan Leavy (eight wins in eight Tests), Stockdale doesn’t know what it is like to lose a yet. But next comes the sternest test so far.