Out half Jonathan Sexton says that Ireland need to take their chance at a Grand Slam "with both hands" as England loss to France confirms Ireland as Six Nations champions. 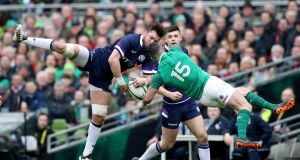 Ireland don’t do penultimate legs of potential Grand Slams particularly well. History has shown us that. Players are not robots, and with the bigger prize on the line, it’s only human nature that a nervous edginess creeps into their game. But even when they’re spluttering slightly, there remains a remorseless efficiency to this Irish machine.

History beckoned and they knew it. This even filtered through to the crowd, which was muted and almost as edgy. With each error – and there were a few – the crowd groaned, and Johnny Sexton, the team’s leader in many ways, grew tetchier. Yet such is this squad’s base standards, that they still registered a third successive bonus point win at home.

Ireland had clearly wanted to play with ambition, eschewing a straightforward three-pointer for a lineout in the corner, but rather typically of their first-half performance, Rory Best overthrew to Peter O’Mahony slightly.

The Scots applied good line speed, especially on Johnny Sexton, generally made their tackles and were competitive enough to force four turnovers at the breakdown – a high return against any Irish team. True to form, Scotland were also full of ambition, whether with quick throws, counterattacks, offloads and width.

This was typified by Finn Russell taking a quick throw to himself before long passes by him and Sean Maitland transferred the ball the full width of the pitch for Huw Jones to chip Keith Earls and beat Rob Kearney but fail to execute the left to right pass to Hogg.

They’d butcher another great opportunity when Hogg’s pass missed Blair Kinghorn, but from the resulting scrum, Russell, Hogg and Maitland worked Kinghorn over in the corner with a perfectly choreographed training ground move. They never went away, and might have had other tries too, notably when Horne was put through a gap by Russell’s pass but passed wildly beyond Kinghorn when a short ball to Jones would probably have made the score 21-15.

Certainly there was further evidence in this display that Gregor Townsend’s upwardly mobile team will be a tough proposition for Ireland come their crunch World Cup pool meeting.

There was some good Irish rugby too, such as Sexton’s chip, gather and offload to the supporting Murray, but sometime even the good play was undone. Off their ever reliable scrum, Murray and Aki worked a switch to the open side which gave Garry Ringrose acres of space to step Peter Horne, which he duly did, but having galloped upfield he might have been better served giving a short pass to Keith Earls, who had alertly supported his break.

Admittedly, it was about the only blemish on Ringrose’s outstanding return to the Test arena, made all the more remarkable given he had only played six games since his last international in June, and one game of 57 minutes against the Southern Kings since January.

All the pack put in huge, unstinting shifts. James Ryan’s numbers were again monstrous, 15 carries, 14 tackles and heaven knows how many clear-outs

As well as trucking it up straight and hard, he used his wonderful footwork too, beating five defenders in all and making 92 metres off a dozen carries, showed his innate footballing ability by tipping on Sexton’s flat pass to Stockdale in the build-up to his second try. He then executed the wraparound with Aki for Stockdale to step Blair Kinghorn.

Three different 13s, three superb performances, and Ringrose also reminded us what a good defender and tackler he is. Among his dozen tackles were some really good reads. This improved the defence out wide, even if that still remained imperfect.

Ringrose’s performance was a contender for Man of the Match, albeit Rob Kearney’s aerial work and strong running were hugely instrumental, especially in that difficult first half. By half-time, Ireland were indebted to an injudicious pass from Peter Horne which Jacob Stockdale picked off and Huw Jones butchering a regulation two-on-one finish with, of all people, Stuart Hogg, for a somewhat flattering 14-3 interval lead.

All the pack put in huge, unstinting shifts. James Ryan’s numbers were again monstrous, 15 carries, 14 tackles and heaven knows how many clear-outs. He also seized his moment, gathering Stuart McInally’s slight overthrow for John Barclay, running through Greig Laidlaw and offloading to Rory Best to generate the attacking ball which led to that second Stockdale try with the final play of the first period.

After the break, the sun came out, Ireland were more direct, tightened up their control of possession and went to their maul. After a key turnover by Peter O’Mahony, Ireland were rewarded for going to the corner when first Murray burrowed over with a little help from Aki, and then Sean Cronin plunged for the line.

By then Ireland had turned to their bench and, not surprisingly, this time they made a bigger impact. The efficiency of the machine is such that seemingly any one in Ireland’s top 30 players can seamlessly fit in, for as much as anything, this campaign has underlined Ireland’s strength in depth nowadays, which is perhaps unprecedented.

That XV’s average age is just shy of 25, and came into the game with less than 21 caps per man. For seven of them, this is their first Six Nations.

Even allowing for the huge impact which the more experienced standard-bearers of this team bring to the party – particularly in the spine of Rory Best, Devin Toner, most obviously Conor Murray and Johnny Sexton, and Rob Kearney – there is a remarkable infusion of young talent coming through.

Many of them look like being around for a long, long time, but it’s all about the immediate future now. Bring it on.