Tribute to Paulie’s legacy came with collective performance against Wales 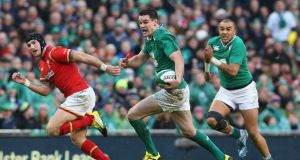 Johnny Sexton in action against Wales in their Six Nations opener. “On seeing his demeanour on the field last Sunday it looked to me like he was enjoying his rugby again.” Photograph: Getty Images

The well-worn line about doing the jersey justice resonates in the wake of Paul O’Connell’s retirement from rugby. But a genuine tribute to Paulie’s legacy came with this collective performance against Wales.

The base expectation I’ll always have watching Ireland is that everyone plays with unbridled passion. I saw that and plenty more last Sunday.

The most encouraging aspect was the defensive excellence of Keith Earls and Andrew Trimble along with clear evidence that Joe Schmidt has added to the playbook.

I’m out of Carton House since August. On Sunday I saw moves that have never been used by a Schmidt team, even in training, dating back to his arrival at Leinster in the summer of 2011.

My only frustration, from high up in the West Stand, was during those last 15 minutes we didn’t make Wales play out of their own territory more. Maybe that’s when we missed O’Connell as the Irish forwards, in a refusal to show even the slightest sign of weakness, kept pounding away.

That’s not a criticism of Rory Best’s quietly efficient leadership but maybe Simon Zebo’s left boot or Johnny Sexton’s right could have put the ball deep into the opposing 22, like Jon Davies did to good effect on a few occasions.

But the wingers had a huge bearing on Ireland avoiding defeat with defensive reads in all or nothing situations. They were clearly under instructions to defend high up the field. This is risk-reward situation means one missed tackle, in several instances, and Wales win the game (Dave Kearney for Earls looks likely now as Dave did a similar job in Paris two years ago).

It’s rare that wingers get credit for a result when neither of them scores a try but their value in such a risky defensive approach cannot be overstated.

The positioning of Trimble and Earls was done to counter a perceived Irish weakness. Within six minutes George North attacked the wide channel but he squandered a three-on-two situation. Wales kept coming.

Earls stayed alive to make a try-saving tackle on Tom James but, knowing they had numbers on the other side of the field, Trimble had to rush up and knock the ball from Alun Wyn Jones’ hands with a smashing tackle. That was a certain try against a passive defence.

The crucial point is a dog-leg can only happen when the wide defender gets head of the man inside him. Ireland’s defence never made this error so Wales never made a line break.

Most encouraging of all from Ireland, after checking Wales’ initial onslaught, was how they laid down an attacking marker. On 10 minutes, as Best led a pod of forwards around the corner, Murray fed Sexton going back the other way. Ironically, if the ball was a second or two slower the Best pod would have seemed a more viable option and all that was needed was for one more Welsh player to fold over to leave Wyn Jones exposed. But it showed that Ireland are adding a new attacking dimension to their game. The eventual reward was another Johnny penalty to make it 6-0.

The Conor Murray try was born out of a Priestland fumble near Ireland’s 22. Tommy O’Donnell fly hacked down field, there was a brilliant chase and turnover, a clever Robbie Henshaw kick, Dev Toner blocked Gareth Davies’ attempted clearance before Priestland compounded a string of Welsh errors by kicking to touch instead of touching down for a 22. This presented Ireland with an attacking lineout tailored for CJ Stander.

Stander reminds me of Keith Wood in the way he carries with no interest in his own well-being. Jack McGrath hid CJ’s lazy run around the lineout then linked onto Dev to fake a maul. Welsh hooker Scott Baldwin, who was defending the tail, bought the dummy drive which forced Priestland to tackle the charging Stander.

From three quick rucks off the resulting scrum, an Irish player made sure to clear a Welsh man onto the ground to reduce the numbers defending the try line with each carry. Stander made a big arching run-up and when Tipuric turned his head, and stepped offside to stop him, Murray knew a dummy would yield a try (The scrumhalf played with a new level of responsibility needed for Ireland to improve).

13-0. Only Joe could have dreamt a better start.

Word clearly came on from Warren Gatland to stop committing so many bodies to rucks and that changed the game’s dynamic.

As this season progresses we should see more of Heaslip the number eight, the link player, as Seán O’Brien and Stander do more of the heavy lifting. Murray was controlling the game’s tempo at this stage and put O’Donnell over the gainline before Payne threw a pass into Priestland for the Irish penalty. Sexton ignored the three points on offer and went in search of a try. That’s how you win in Paris.

After Zebo’s break and offload for Murray, Wales had learned not to over-commit to the breakdown so it seemed like there were more red jerseys on the field. I couldn’t help thinking of how Nathan Hines would drag two or three bodies into a ruck. It would have no value in that moment but move on another three or four phases and the hole might appear.

Sexton kept seeing opportunities to attack Wales out wide but poor execution saw one promising move fizzle out. As a teenager I was taught the value of timing my run on to the ball. You can always accelerate in a split second but you can’t go backwards.

The attack on 63 minutes was tailored-made to expose Jamie Roberts and, really, it deserved a try. It was an adventurous move, when Ireland would have been forgiven for playing safe, requiring 10 players to accurately accomplish small jobs in order to fish Roberts out of the defensive line. The beauty of it was the bluff – it had been Henshaw up the guts all game and then without warning Sexton drifted wide and Henshaw ran the decoy.

This was a clear example of extracting a weakness from a clear Welsh strength; Roberts’ lateral movement wouldn’t be as strong as other centres and he clearly decided to be the man who tackled Henshaw all afternoon. So Robbie ran straight to create the gap for Johnny. I know Robbie’s pain this week. I used to run those lines against Wales, knowing full well I would be emptied by Jamie but also knowing the net result if everyone does their job. Once Roberts comes that high up the field he has to hit somebody (Robbie) as Johnny disappeared through the gap. Tom James had the pace to put Trimble into touch but I would argue with anyone who says he should have passed inside to Zebo because Simon was ahead of him.

Thereafter Ireland needed to build a score. Easy to say from the commentators box. Any errors we saw are to be expected as this was a chance for players to get a feel for each other again. The Sexton-Henshaw-Payne combination hadn’t been together since the World Cup warm-up against England on September 5th.

Now, presuming Ireland play the same on Saturday, with high wings, is to second guess the Ireland coach. Never a smart move. Jules Plisson doesn’t like to kick, he likes to play an attacking game so the high wings might be the solution again.

What I hope to see is Ireland playing the same rapid, ball-in-hand game which Johnny Sexton orchestrates better than most but he can only do this if the forwards reach the same levels of precision at the breakdown.

This might sound strange but having played with Johnny many times, on seeing his demeanour on the field last Sunday it looked to me like he was enjoying his rugby again. When a pack shows up for Johnny he puts his team in a position to win the game. Or, as was the case here, not lose it. It will be the same as it always is in Paris – attritional. Expect a large body count. France dusted off the cobwebs against Italy. After going behind they went the length of the field with a power play, and some great hands, to score a try. With respect to Italy, it looked like they could score whenever they wanted.

Recovery is everything for Ireland this week because tactically I have no worries about Schmidt’s Ireland against France under Guy Noves. This we were reminded once again in Sunday’s, above all else, honest performance.