Gordon D’Arcy: The All Blacks of Europe? We can be better 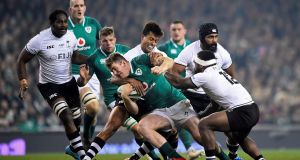 Ireland in action against Fiji at the Aviva Stadium in Dublin last weekend. Photograph: Clodagh Kilcoyne/Reuters

Ireland are being called the “All Blacks of Europe” by a visiting Springbok coach and a 22-stone Fijian winger who floats like a butterfly.

Both Allister Coetzee and Nemani Nadolo meant it as a compliment.

Strength in depth, as a soundbite, is all well and good, but does it really matter when it comes to Ireland’s ultimate aim of progressing past a World Cup quarter-final?

For that to happen we will need 25 players of equal stature and even then, certain men are always going to be irreplaceable.

Comparing Ireland to New Zealand is all well and good. But it’s a soundbite and, after the World Cup 2023 shenanigans, people in Irish rugby know not to inhale hot air funnelled in our general direction anymore.

Especially not at this midway point of a World Cup cycle.

Strength in depth is really only relevant to the All Blacks (of New Zealand). They are the sole rugby nation that can dig three or four players deep in most positions and keep unearthing marvellous talent. But Steve Hansen knows it’s an irrelevant cliche. Strip Sonny Bill Williams and Ryan Crotty from their midfield in the middle of a Lions series and see how they struggled.

Experience is a more important characteristic.

South Africa had some strength in depth until their Springboks began migrating north. England have genuine competition for places. It’s just that their strength – and I’m predating this assertion to March 2017 – is beatable with the right blend of Peter O’Mahony, Conor Murray, Iain Henderson, Tadhg Furlong, Johnny Sexton et al.

Eddie Jones has been saying from day one as England coach that they don’t possess truly world-class players (Maro Itoje and Owen Farrell have attained this status). But they do possess more above-average internationals than any other team.

More than the All Blacks. Hansen is mining for strength in depth, so that will have changed when they get to Twickenham in November 2018.

Meanwhile, the All Blacks of Europe are progressing nicely. Strength in depth has never been crucial to Irish success. Probably never will be. Strength in numbers is our friend. We have always known this to be true. So does our coach.

The second- or third-best scrumhalf or outhalf in New Zealand can command a lucrative salary in the Top 14 (see Aaron Cruden, to Montpellier, and Tawera Kerr-Barlow, soon to be at La Rochelle). Until this summer, their sixth- or seventh-best inside-centre could move to Galway and within three years command a tasty quasi-national IRFU contract.

We know this, yet the party line remains a focus on building strength in depth. If the walls collapse, as they did the last time we played Argentina, the lack of Test match exposure for our reserve players will be apparent yet again.

What have we got brewing beneath the surface to make us an unbeatable sum of our own parts?

England, New Zealand and a desperately poor France have their multi-cultural squads so we, in turn, retained an over-arching policy of overseas recruitment to improve the standard of the second- or third-best scrumhalf or lock in Ireland.

There lies an inherent contradiction. We are building strength in depth but when we failed to nurture sufficient local talent, Jamison Gibson-Park was recruited to lean on Luke McGrath, Jean Kleyn to replace Paul O’Connell and Gerbrant Grobler to fill the void left by Donnacha Ryan’s move to Paris.

Gibson-Park and Kleyn will go to Japan 2019 as Ireland players. As cover, initially, to improve our strength in depth.

Considering Carbery hasn’t played at outhalf since June against the USA, his tactical kicking was impressive

So the progress of these project players is just as important as blooding Chris Farrell and Andrew Porter against Fiji last Saturday.

Building strength in depth doesn’t really happen against smaller nations when the Ireland coach makes 13 changes. I see the value, of course, but the environment cannot accurately tell us if Farrell and Porter will become genuine rivals to Garry Ringrose and Tadhg Furlong.

Farrell could make serious strides if dropped into a midfield outside Sexton, Bundee Aki or Robbie Henshaw. Stuart McCloskey, I’m still to be convinced. A massive centre, he will remain third in the number 12 pecking order until his size begins to influence games.

Fiji were good. Ireland were disjointed, as happens when youthful naivety is used en bloc. The experienced cavalry did what was needed to secure a narrow victory. All told, the new players got to experience a Test match in Dublin. That’s important but pales in comparison to what the Pumas will bring this weekend. Well, I hope so. Otherwise November falls some way short of the education Scotland are getting.

I would have liked to see Joey Carbery close out the game the way Ian Keatley ended up doing. Would like to see Joey finish a game. But there’s plenty of encouraging aspects to Carbery’s brief exposure at 10. We know he is a natural.

The stalled pass for Darren Sweetnam’s try is a rare gift. He created the score by ignoring inside runners, travelling cross field, before shifting the ball into two hands.

Considering Carbery hasn’t played at outhalf since June against the USA, his tactical kicking was impressive.

Stuart Lancaster stated this week that Leinster were going to play him at 10. So the obvious problem of exposure will be addressed. Until that happens, Ross Byrne has a chance to ruin best-laid plans by accelerating his understated yet impressive development.

The real question is:  can Ireland in 2019 produce a superior match-day squad to the 2015 team that beat France?

These are good problems, fitting for the All Blacks of Europe. Other nations love to butter us up. Always have. We are wise to that talk now. Ireland are the fourth-ranked team in the world, deservedly so, but we must continue to be the team that works tirelessly from dawn until dusk to make our play look so seamless.

Did anyone put their hand up for selection this weekend? Jack Conan’s probably in the discussion, with Rhys Ruddock for the bench.

I hope Joe Schmidt experiments some more. James Ryan and Henderson would provide a glimpse into the long-term secondrow partnership.

Schmidt will return to the well-oiled machine that dismantled South Africa because that’s the core we are building to go where no Irish team has gone before (week seven at the World Cup).

Because it’s Argentina week, let’s remember the nightmare scenario. Best-laid plans were shredded when Seánie got suspended, Paulie lost a hamstring, O’Mahony’s knee snapped while Jared, Johnny and Tommy all broke down.

If history repeats itself in 2019, strength in depth will prove as useful as a pre-booked sleeping pod in Yokohama. We, like any nation, cannot cope with such misfortune.

The real question is: judging from the halfway point of this journey, can Ireland in 2019 produce a superior match-day squad to the 2015 team that beat France?

I would argue yes. O’Connell the leader is irreplaceable by any one man. But Dev Toner, Henderson, a filled-out version of James Ryan and Kleyn should suffice. Jared Payne might still be around but Aki, Henshaw, Ringrose and maybe Farrell will have the midfield in good shape. As cover for Furlong, Porter has a long way to go but the potential is there.  Ireland can’t replace Murray or Sexton but the cover will be different.

Valuable lessons have been learned. The emotional outpouring on the pitch after we beat France to top the pool will probably never happen again in our lifetime. As that unfolded, the Argentinean team room must have experienced a surge of belief. Crocked Sexton, O’Mahony and O’Connell with O’Brien to be suspended, and here they are celebrating like they’ve won something.

Flip it over to understand the psychological fillip: we are waiting for the All Blacks and Dan Carter limps off, Richie McCaw departs on his shield, followed by Jerome Kaino. Brodie Retallick gets done for tickling Pascal Papé. Even Ma’a Nonu gets hurt.

Every Irish player would be thinking: we can go out and play our best game, unbridled by pressure, in a World Cup quarter-final. We can beat them.

Actually, we did. Four of that five didn’t make Soldier Field, Chicago and Kaino went off injured.

That’s how Los Pumas felt last time we played them. Saturday is a vastly different scenario.

Argentina have failed to really kick on from the 2007 World Cup despite benefiting from exposure to South Africa’s provincial system, Graham Henry’s expertise, the Jaguares entry into Super Rugby and facing New Zealand twice a year in the Rugby Championship.

But they have performed immeasurably better than us, to our direct suffering, at World Cups.

This conundrum still needs solving. Building strength in depth is a by-product of all this but, and we all know this, our very best players must be out there if we are to ever stop the opposition from uttering back-handed compliments like “the All Blacks of Europe”.

Liam Toland: Astute kicking game helps England establish a stranglehold 06:30
Ken Early: Guardiola eyeing what could be a last chance for European glory with City 06:00
Galway’s ‘massacre of a beating’ on Tyrone a statement of intent to Dublin 06:00
Magic Wand in the running to conjure Riyadh win 06:00
Six Nations: Pitch-perfect England expose character flaws 06:00
Here is your handy guide to sport on television this week