Gerry Thornley and Liam Toland of The Irish Times reflect on Ireland's disappointing 21-10 defeat to England in the Six Nations. Video: Gavin Cummiskey 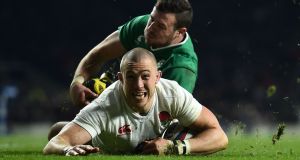 In the end, power told. England’s greater array of ball carriers and explosiveness in the collisions – epitomised by the phenomenal Billy Vunipola – eventually wore Ireland down, as you always suspected it might, albeit that no less than the home side, Ireland will rue missed opportunities too.

Too many handling errors, lineout malfunctions and playing in their own territory contributed to Ireland’s difficulties, which were compounded by the impact England could unleash off the bench. That said, Ultan Dillane made a stunning entry into Test rugby as Ireland’s third debutant, while Josh van der Flier and Stuart McCloskey showed they could compete physically at this more exalted level.

Of the old school, Johnny Sexton and Conor Murray were simply outstanding.

Ireland will also feel aggrieved over many of the officials decisions, which mostly seemed to go England’s way; and the home side certainly showed a proficiency for cynical play which wasn’t always punished.

That the first half finished only 6-3 to England was more a commentary on the two sides’ execution, or flawed execution, rather than their positive intentions, especially so England, given they had so much more of the possession, territory and opportunities. To be honest though, Ireland contributed to the often intense pressure on themselves with their poor handling.

In the absence of Seán O’Brien, Iain Henderson and others, England’s greater array of ball carriers continually had them on the front. Billy Vunipola was a human wrecking ball, and was credited with 58 metres from his first nine carries in the opening half hour, also beating six defenders. For the most part, he just ploughed through them, even strong men like Andrew Trimble and Conor Murray. In the first half, England carried for 295 metres to Ireland’s 79, and Vunipola accounted for 75 of those – almost as much as the Irish team.

James Haskell, Dylan Hartley and Maro Otoje also took good hard straight lines, and the passing range of George Ford and Owen Farrell created space out wide. But compounding England’s lack of composure was the undoubted bravery, if sometimes in desperation, of the Irish defensive effort.

From the off Ireland showed a willingness to go wide before often having no choice but to take to the air, as England did, but the surprise was to see Ireland continually employ this wide running game in their own half when territory looked a better option. That said, England defended the kicking game well, notably Mike Brown.

Ireland did have the encouragement of a bright start when Trimble chased down Murray’s bomb and did enough to force a spillage from Brown. England were pinged at the ensuing scrum when Dan Cole hit the turf, and Sexton landed his eighth kick from eight from 40 metres to open the scoring.

The line speed of England’s defence was forcing Ireland back, as Robbie Henshaw and Rob Kearney were nabbed deep behind the gain line in the ‘13’ channel. Soon after the first, CJ Stander was pinged for not rolling away after the tackle and Farrell levelled matters.

Farrell let Ireland of the hook when going off his feet at an attacking ruck, which would become a recurring theme. But after Sexton negotiated a huge penalty to touch in the corner, Stander did well to claim the lineout only for Rory Best to knock on and it then required excellent covering work by Rob Kearney and Keith Earls from Brown’s punt downfield.

Romain Poite penalised Henshaw for blocking Farrell and thus creating the hole for Sexton to run through, although Farrell missed the 38-metre penalty. Jamie Heaslip poached for the first of two penalties at the breakdown after Best and Henshaw tackled Brown. For a second time, Sexton found a very good touch with his penalty up the line, but the attack again soon floundered when Trimble knocked on Van der Flier’s feed off the lineout maul. Easy in the cheap seats, but that was a very basic error.

It led to England cranking in their scrum, and then their lineout maul. When Vunipola sneaked up an unguarded blindside and speed-bumped Trimble, only the covering tackles of Murray and then Stander prevented a try. Hartley was penalised for a double movement when driven over the line after somehow being held up short by McCloskey and, of course, Murray again.

Alas Sexton’s penalty to touch was underhit sufficiently for Brown to keep it in play and maintain the pressure. Donnacha Ryan and Stander held up Vunipola, before Ireland curiously opted for a blindside move and McCloskey knocked on Sexton’s pass; the latter making amends by coming in off the wing to force a spillage by Ford with a try again begging.

Ireland again ran out of numbers when Kearney was tackled by Jonathan Joseph behind the gain line, and when Stander was done for coming in from the side after an isolated Devin Toner lost the ball in contact, Farrell made it 6-3.

Nearing half-time, Ireland had made over twice as many tackles, 95 to 38, while missing 18 to one. Henshaw single-handedly set about putting a better balance on those stats when using his footwork, acceleration and strength to beat five defenders in one mesmerising run from half-way.

From there, the half ended in suitably mad cap fashion when Otoje won a turnover on the ground off Stander’s carry only for Toner to spoil Ben Youngs at the base, whereupon Heaslip’s grubber up the line was way over-cooked.

As was the case two years ago, Ireland benefitted more from the interval, and although were held up when going to the corner were helped along by a late high hit by Haskell on Murray which correctly led to a penalty.

Again they went to the corner, and Stander showed superb leg strength in a carry to the line before Murray went blind, dummied and beat Youngs’s tackle to score his and Ireland’s second try of the tournament. Sexton landed a superb touchline conversion for a 10-6 lead.

England were given a soft three points when Farrell ran into Toner off the ball and kicked the penalty, before Murray, with help from McCloskey executed a choke tackle on Brown. Ireland went wide to Trimble from the scrum but shortly after a late hit by Youngs, Sexton made a basic knock-on. In the ensuing defensive disorganisation, Farrell broke through off Ford’s pass and gave Jack Nowell a run. Earls made a superb tackle, but with Vunipola again making a big carry, Anthony Watson had a walk-in from Chris Robshaw’s long skip pass.

When Van der Flier was offside at a ruck, England came up field again and from the lineout probed the Irish midfield before Vunipola again took three men with him over the gain line, and good width from Ford and Farrell gave Brown a walk-in, Farrell’s conversion making it 21-10.

Ireland were far from done, as Sexton and Henshaw probed, The outhalf’s superb break and pass put Henshaw but he didn’t quite have the pace to outsprint the covering Nowell, whose brilliant tackle was enough to prevent Henshaw keeping the ball in his right hand as he stretched out for the ground.

Dillane made a huge impact with his debut off the bench, busting the tackles of Hartley and Cole before taking the return pass from Van der Flier. Danny Care made the covering tackle and was eventually binned for not rolling away and thus preventing recycle short of the line. Meantime the TMO absolved Brown of a yellow when his stray studs caught the prostrate Murray above the eye, forcing his departure, on the basis that it was accidental. If so, it was dangerously careless.

Ireland had their toughest call of all when van der Flier was not awarded what appeared to be a clear enough touchdown after more good carries by Dillane and Henshaw with six minutes remaining.

Ireland kept coming, which was encouraging, but a lost attacking scrum compounded the loss of three attacking lineouts. A lack of accuracy, and England’s greater ball-carrying ballast – epitomised by Vunipola – earned them their third win in three games, setting up a probably title shoot-out with Wales here in a fortnight.