‘There’s so much strength in depth in the squad, your previous experience doesn’t really matter’ says Ringrose 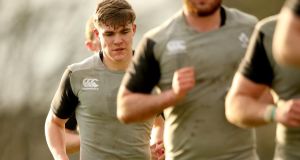 There is no hiding place. Shortlisted as a teenager for the 2014 Under-20 World Player of the Year, Garry Ringrose returns for a second season; the opposition are forewarned if not forearmed. Given his prodigious ability, there is a reputation to uphold, but for him that’s an incidental notion because his focus is exclusively on working hard to develop as a player.

He is all about the team, something that is striking in the way he plays without a scintilla of self indulgence, whether that’s UCD, Leinster A, or the Ireland Under-20s.

Ireland’s 47-15 victory over Italy in Biella, contained seven tries, a decent achievement on a gluepot surface. On Friday they face a much more difficult assignment when a French side that thumped Scotland 47-6 present their credentials at Dubarry Park.

He’s enjoying his rugby and doesn’t feel any additional responsibility as a senior player. “It’s brilliant. It’s very exciting, kind hectic but from my point of view; I’m just trying to keep my head down and focus on the next task, the next game. Each training session, take it for what it is and try and be better than when I started. There’s a lot going on but in my head it’s quite simple, I’m just focusing on each day.

“Obviously Nick (McCarthy) is captain and there’s a kind of leadership group being put together between about eight or nine of us. Regardless of me having been there last year, there are a lot of new guys stepping up into leadership roles.

“In the video sessions, everyone is piping up. Everyone has an input and you get a different perspective from each person. Personally, I’m just trying to build on last year and see where it takes me.”

Ireland coach Nigel Carolan has made two changes to the team. Stephen Fitzgerald comes in on the left wing for the injured Greg O’Shea, Jack Owens switches to the right, while Sam Arnold starts in the centre with Fergal Cleary named among the replacements.

Hugo Keenan could start in changed Ireland team against Italy 21:04
Guardiola takes blame for City’s European failings 21:12
Kelly and Lynch ready for Thurles showdown as if it’s their last 21:29
Wijnaldum attacks ‘stupid’ Pickford tackle on van Dijk 20:10
Golf clubs waiting to hear if they can stay open under Level 5 18:55
Crossword Get access to over 6,000 interactive crosswords