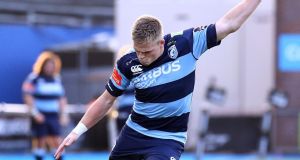 23-year-old Gareth Anscombe, who is from New Zealand but has a Swansea-born mother, has been named in Wales’ Six Nations squad. (Photograph: INPHO/Simon King)

Gareth Anscombe, the 23-year old New Zealander with a Swansea-born mother, has been named in the Wales squad less than three months after leaving the Chiefs for Cardiff Blues.

The arrival of Anscombe, an outside-half who has played at full-back, spells the potential end of James Hook’s international career. The Gloucester pivot was omitted from the 34-strong squad with Dan Biggar and Rhys Priestland the other No10s chosen.

There was no recall for the veteran tight-head prop Adam Jones, even though Samson Lee is a doubt for the opening game against England because of a neck injury. Scott Andrews was recalled to reinforce the front row and Jones, who has won 95 caps, looks destined to miss out on his century for Wales, although he has played five Tests for the Lions.

Anscombe is one of four uncapped players in the squad. The Scarlets prop Rob Evans, the Blues’ hooker Kristian Dacey and the Newport Gwent Dragons’ centre Tyler Morgan are the others, but overall there is a sense of familiarity with 13 of the players who started the record victory over England in Cardiff two years ago in the 34.

Sam Warburton remains as captain and while Wales largely have a settled starting team, there will be a debate about the back three where Alex Cuthbert has been struggling for form all season while the other wing, George North, was rebuked in the autumn about a lack of work-rate during the defeat to New Zealand. Wales have the option of picking Liam Williams on the wing or putting him at full-back and moving Leigh Halfpenny out wide.

While Hook and Adam Jones have been jettisoned, the scrum-half Mike Phillips has retained his place, although the inclusion of Gareth Davies, who impressed during last summer’s tour to South Africa, will ensure a battle for the place on the bench with Rhys Webb secure in the starting lineup.

“It’s great to be able to name such an experienced squad that also boasts some exciting young talent,” said Gatland. “The four uncapped players have all been going well for their respective regions and it will be good to see them in this environment and we hope they take the opportunity. They come into a squad packed with experience and that experience will be important to us over the next eight weeks and the year as a whole.

“We all know how tough the Six Nations is and we kick the tournament off with a huge game against England and that is something you have to be excited about and look forward to. We were pleased on the whole with the autumn campaign and this is another opportunity for us as we look ahead to a very big year in the rugby calendar.”

Wales have away matches in Scotland and France before facing the champions Ireland at the Millennium Stadium and finishing with Italy in Rome. The Wales’ squad in full:

1 Cian Healy: ‘Realistically I got away with murder when I was younger’
2 Seán O’Brien: Anger over my parents’ break-up never left me
3 Johnny Sexton: ‘We just know we have to be a lot better in all areas on Saturday’
4 Ireland's centre will hold thanks to Henshaw and Aki’s midfield muscle memory
5 Gerry Thornley: Antoine Dupont and France look perfectly primed for Ireland visit
Real news has value SUBSCRIBE