Ireland work hard in defence, but fail to stop tries from Anthony Watson and Mike Brown

Much like the game itself, this was a decidedly mixed bag of an Irish performance. Opinions will probably vary more wildly than usual as a result. Losses at Twickenham are never pleasant, and this was a fifth in a row, but as defeats at the citadel of English rugby go, one can think of at least four or perhaps five worse ones since the turn of the millennium alone.

There will be plenty with which Ireland can reproach themselves. For the third game running, if not to anything like the same extent, the scrum failed, especially at one critical juncture against seven men, but the line-out malfunctions were even worse.

Three times Ireland lost line-outs in the English 22, and on two other occasions in the first half, after securing their attacking throws, this was swiftly followed by basic handling errors from Rory Best and Andrew Trimble.

There’s an anxiousness now to Ireland’s attacking game. They moved the ball liberally and played with width, perhaps at times too much so, but the handling errors were most untypical of a team coached by Joe Schmidt.

Predictably, England had way more ball-carrying ballast in the absence of Seán O’Brien and Iain Henderson, and had more joy from their superior defensive-line speed out wide, where Ireland were comparatively softer. Of Ireland’s 19 missed tackles, 10 were against the human wrecking ball that was Billy Vunipola.

Eddie Jones, never shy of an opinion or two, reckoned England should have been 20 points ahead by the break and he had a point there.

Yet the defiance and work-rate of Ireland’s defence in that first half was immense before they turned the game on its head. Conor Murray, at the apex of one of the great Irish number 9 performances, became the first man to breach England’s try-line in this championship when scoring his and Ireland’s second try of the campaign. It was a reward for the forwards after twice going for the corner while Haskell was binned.

Johnny Sexton too was immense, save for one missed penalty to touch and a fumble shortly after a late hit by Ben Youngs. He single-handedly caused the English defence more torment with his probing running and passing than they’d experienced in three games to date. 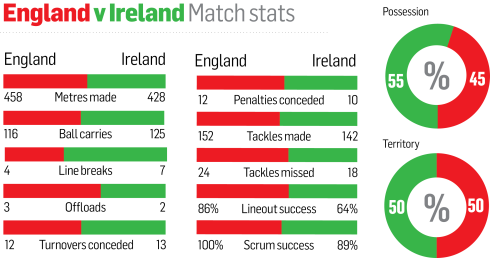 On the day when Maro Otoje announced the arrival of a world-class star on the test stage, Ultan Dillane made a fairly eye-catching entry too, albeit when the game had loosened up. His route to this level has been more circuitous than that of Otoje, an under-20 World Cup winning captain, but his athleticism is utterly natural. He can only get better.

It was also good to see the hard-working Josh van der Flier grow into the game; to see Stuart McCloskey take the game to England early in the second half, to see Robbie Henshaw run more freely outside him and to see Rob Kearney return to something like his authoritative, imposing self.

Jones added that nobody could have complained had it finished 40-10 or 30-10. He certainly has a way of plucking figures out of the air. For sure, that kind spanking was in the offing after the double whammy of walk-in tries by Anthony Watson and Mike Brown either side of the hour, but with seemingly less impact off the bench as well, Ireland’s positive rally was even braver than their first-half resistance.

On another day it would have set up a nail-biting finish, not least when van der Flier appeared to ground the ball after good carrying by Dillane and Henshaw. And prior to that there was Dillane’s charge, exchange with van der Flier and carry to the line, and Henshaw’s failure to complete a one-handed touchdown at full stretch when released by Sexton’s brilliance but corner-flagged by Jack Nowell.

Asked where Ireland needed to improve, Schmidt said: “Putting the ball down”, before lamenting those three missed chances. Against that, he admitted, “We lost three or four line-outs in the 22, you just can’t afford to do that against a side like England because they’re not going to invite you back in and give you another shot. And even when they did allow us back in there we didn’t convert.”

While the defence typified the team’s “character”, Schmidt also conceded that “we showed a bit of nervousness and a little bit of anxiety that we can’t afford to show. You’ve got to be confident in the system and confident in your ability in a one-on-one to make your tackles. While we struggled to make a few tackles on Billy Vunipola at times, some of the tackling was first rate and some of the defence, full stop, was first rate.

“But if you calculate how many ‘almosts’ you could potentially factor in there, there doesn’t seem to be a massive gap in a two-tries-to-one game, it’s not a massive distance.”

Akin to Paris, Ireland could feel both a little victimised and aggrieved over some of the calls by the referee, Romain Poite, and his TMO, Shaun Veldsman of South Africa. As with Guilhem Guirado’s high hit on Dave Kearney (when at least the Irish winger had the ball in his hands), James Haskell’s yellow card for his late, thuggish high hit on Conor Murray bordered on a red.

When Care was yellow carded for cynically not rolling away after tackling Ultan Dillane short of the line, and while it’s rare for officials to dole out simultaneous yellow cards, Mike Brown was fortunate that Veldsman regarded the full-back’s kicking of a prostrate Murray as accidental. If not deliberate, it was assuredly dangerously reckless given Brown attempted to connect with the ball three times before catching Murray just above his left eye.

Matt Williams: Learning to flex your resilience muscle is a vital life lesson

Gatland set to announce Lions squad; Chelsea will take the game to City in Istanbul

1 Shaun Murphy: ‘I always felt I would call Ireland my home’

3 Limerick respond with nerveless self-belief to draw with Tipperary

4 Matt Williams: Learning to flex your resilience muscle is a vital life lesson

Forthright McLoughlin never afraid to speak his mind 07:00
Matt Williams: Learning to flex your resilience muscle is a vital life lesson 06:00
Mané and Thiago on target as Liverpool see off Southampton 22:47
Leinster back to their best to obliterate Connacht 22:54
Shamrock Rovers came from behind to beat St Pats in top of table clash 21:56
Crossword Get access to over 6,000 interactive crosswords