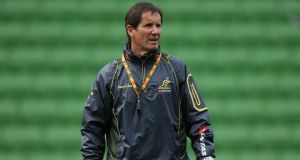 Australia coach Robbie Deans has given James O’Connor another chance at outhalf and promoted Kurtley Beale to starting fullback for the Wallabies’ must-win second test against the British and Irish Lions in Melbourne on Saturday. O’Connor struggled in the pivotal position during the Wallabies’ 23-21 loss in the first test in Brisbane, but will have a chance to make amends in the match at Docklands Stadium.

Beale, who started on the bench last week and missed two late shots on goal that could have given the Wallabies victory, slots into fullback in place of the injured Berrick Barnes.

Deans was disappointed by the presence of Beale and O’Connor in a fast-food restaurant in the early hours of the morning, but did not consider dropping them. The Melbourne Rebels duo were photographed at 3.50am in Hungry Jacks where they posed for pictures with supporters, but the Australian Rugby Union established during an investigation they had not been drinking.

Beale has only recently returned to the Wallabies after undergoing treatment for alcohol-related problems. While deciding not to discipline them, Deans was unimpressed by the poor judgement of Beale and O’Connor.

“That’s not an ideal hour. We’ve had a conversation for sure. Suffice to say it wasn’t a comfortable conversation. They haven’t broken any team protocols, but obviously it’s not best practice. They understood that, but it was too late. Yes they will be prepared for this game.”

Veteran centre Adam Ashley-Cooper insists the development has not disrupted Australia’s build-up to a test they must win if they are to remain in contention to win the series. “It’s not ideal but we’re too far into our preparations to let it affect us. We’re focusing on Saturday,” he said.

Centres Adam Ashley-Cooper and Christian Leali’ifano start after recovering from their respective shoulder and concussion problems, both sustained at the Suncorp Stadium. Leali’ifano was stretchered off after tackling opposite number Jonathan Davies inside the opening minute but has passed the required post-concussion tests and will relieve O’Connor and Beale of the goalkicking duties.

The Brumbies inside centre, who offers a playmaking option, was due to take the kicks at the Suncorp Stadium until he was knocked out. The second and final change to the starting XV sees Joe Tomane, who has recovered from a toe problem, picked on the left wing to plug the gap left by Digby Ioane’s series-ending shoulder injury.

The pack is unchanged with returning 110-cap veteran George Smith unable to break into the 23 despite his recovery from a knee injury. Prop Ben Alexander, a strong performer in Brisbane, becomes the 38th Wallaby to feature in 50 tests.

Centre Rob Horne and fullback Jesse Mogg have been added to the bench to cover for the absence among the replacements of Pat McCabe — out for the rest of the year with a fractured neck — and Beale. Australia must beat the Lions on Saturday to remain in contention for the series with the final test played in Sydney on June 6th.