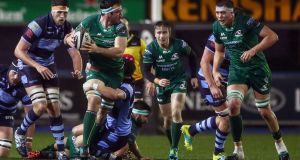 Connacht’s Paul Boyle in action during the Guinness Pro 14 game against Cardiff at the Arms Park. Photograph: James Crombie/Inpho

Up against Conference A rivals and five points ahead on the table before the start, Connacht were presented with a real opportunity to distance themselves from the chasing Welsh side. Instead they did well to salvage a bonus point with a 75th-minute try and conversion to keep their noses in front by just two points.

“A game we could have won and should have won,” said Friend. “And well done Cardiff, because they were very dogged and physical in their approach to hold us out at the end, but we had ample opportunities to get scores and control the game better, and we didn’t.”

Although Connacht completed their latest block of games with a reasonable record of seven wins from 10, Friend says this one-point defeat will be a marker for his developing squad.

“There is a line in the sand on this and we have to decide whether to step over it or stay where we are, and I know this group will step over it.

“At the end of the season we will look back at a couple of games that have been markers for us, and I reckon this will be another one. I have no doubt we will turn it into a positive, but we have a bit of work before we get there.”

Despite missing six players on international duty, in addition to the injured Kieran Marmion and Seán O’Brien, Connacht produced enough chances to win, but once again their lack of clinical execution proved costly. Although Cardiff’s attacking threat was no better – Connacht’s defence keeping them to one score. In the battle of the breakdown the hosts edged this contest.

“It wasn’t pretty,” admitted Friend. “Everyone knew what was at stake. Yes, we’ve got some players out, but it provides an opportunity for players to step up, and a lot of blokes missed their chances tonight.

“Do we want to be a team that doesn’t have players in the Ireland squad so we can keep our squad together? No. We want to keep pushing, keep pushing through, and that is where it was disappointing. Certain players who had opportunities just didn’t take them.”

Cillian Gallagher, making his first start this season alongside James Cannon in the secondrow due to a training-ground injury to Gavin Thornbury, was one of the youngsters who grabbed the chance to impress, while second-half replacement outhalf Conor Fitzgerald delivered some probing kicks to keep Cardiff at bay.

The home side had dominated with the first-half wind advantage, but their scoring opportunities were limited to a penalty from Steve Shingler and a 25th-minute Owen Lane try. However, in winning the collisions, they stymied Connacht’s attacking threats, despite losing two players to the sin-bin.

Connacht briefly wrested control with a succession of four penalties, but failed to break through when, from a five-metre scrum, James Mitchell’s pass under pressure bounced off Tom Daly’s shoulder just shy of the line.

It did not get much better in the second half. Despite establishing some territorial control, their attacking game looked too pedestrian, and their normally reliable maul also stuttered, twice unable to control possession when going forward. They finally made it count in the 75th minute with a forwards’ try finished by Paul Boyle, and a Fitzgerald conversion, but it was too late to rescue only a fourth win at the venue since 2001.

“We talked about being ruthless , and we were far from ruthless,” said Friend. “We were not clinical when we needed to be and paid a penalty on that.

“It is a shot across our bow, and it’s how we come back from it. We had a good block, won seven out of 10 games, and would have liked to have won eight, but we can look at the positives.

“We are still third in the conference, we are not out of it, but that performance needs to be a line in the sand. We need to step over it or stay where we are, and that is the message we have put to them.”