Cooper just super for McKenzie and Australia since his return 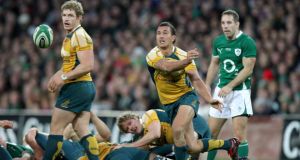 It’s not ridiculous to believe that Australia coach Ewen McKenzie’s recipe for making Quade Cooper sweet is a dash of child psychology and a ladle of soft shoulder. The coach who cut loose the errant James O’Connor for drinking in Perth opened his arms for his outhalf, who tweeted that the Australian squad under Robbie Deans was a “toxic environment”.

The maverick Cooper has acquiesced and has become one of McKenzie’s favoured lieutenants, while O’Connor is at London Irish carving out a career in the Premiership.

That’s the breaking ball of a career path.

McKenzie is clearly not Deans. In the mind of one coach Cooper wasn’t good enough to earn a place in a 31-man squad for the visit of the Lions in June. In the head of the coach that replaced him the 25-year-old embodies the culture of Australian rugby.

Obvious difference
The most obvious difference between the last and current Australia coaches can be seen in their opinion of one man. From being a cast-out Cooper is now one of McKenzie’s trusted leaders and creative playmakers.

“I think he’s in a good space,” said McKenzie after their win against Italy last week, where Cooper’s attacking play was bewitching and cutting-edge.

“He is a bit of an enigma, he plays the game differently to other people,” added the coach. “Some people don’t like that. I quite like that.

“It goes to the philosophy, if you want to play the game differently and you want to have the capacity to do that you need players that have got something they can bring to the table that’s not predictable.”

To even superficially appreciate the New Zealand-born player is to be aware of his past. In December 2009 he was charged by police with burglary after allegedly taking two laptops from a residence on Australia’s Gold Coast. The charges were withdrawn after “completion of a justice mediation process with the complainants”.

Deliberately kneeing
In 2011 he was accused of deliberately kneeing New Zealand captain Richie McCaw in the face in a Tri-Nations Test and earlier this year shared his “toxic environment” tweet as well as criticising the defensive style-of-play and lack of player input under Deans.

He also claimed he could not and would not play for Australia under those conditions and was fined a record AUS $60,000 and suspended from the Wallabies for three matches.

He is also drawn to fast cars, tattoos, no-look passes and, like his close friend Sonny Bill Williams, has boxed professionally.

They thought he might turn to Rugby League. But here he is, enriched and in the bosom of all he despised a few months ago. Borderline philosophical about it all, he’s Australia’s vice-captain and a player they will look to unpick locks and create space where there is none.

“It is 50-50 mindset because you’ve got to have confidence in yourself that you can make things happen,” he says. “I guess, for me, I’ve always got a footy in my hand. I’m always walking about with a rugby ball in my hand thinking of different situations, different scenarios how “if this happened what would I do?”

“So if you’re ever put in those situations you can do it without really thinking about it.

“Then when you’re able to crack things out of nothing out on the field, everyone says it’s from nothing.

“But I obviously say, well my team-mates have done something or someone has done something, created a hole for me or someone outside you has drawn in two defenders and you’re able to throw a dummy and sneak through a hole or something like that – there’s 14 other blokes on your team.”

Cooper is more than the 15th man and always has been. He forces plays that most players wouldn’t see and while sometimes it doesn’t always come off, he remains undaunted.

More recently with his club he has been more consistent and stressing the simple. The less is more has worked but he sees that change of accent as a road towards evolving his game and that changing is all there is to know about being able to progress.

There’s no fear there either.

‘I hate failure’
“I’m like everyone else, I hate failure,” he says. “I don’t want to fail but you’ve also got to know that there will be times when you do fail and you’re not going to be perfect.

“I always say that as a person you can’t be shy of showing your weaknesses but also try to work on them.

“If you go out there and think you’ve got no weaknesses then you’re never going to work on them. You’re better off going out there and expressing yourself.

“We’re all going out there . . . every time we’re on the training paddock we try to improve.”

McKenzie says Cooper directly created three of their seven tries against the Italians. But his critics will point to Australia’s games against the heavy hitters of world rugby.

Ireland would not be counted among them.

Supporters of Deans can point to defeats to New Zealand, South Africa and recently England under McKenzie’s watch and argue that they are illustrative of his outhalf’s deficits and that he has not been able to make a significant difference against the stronger teams.

Public Enemy Number One
But McKenzie is also right, Cooper at one stage may have been called New Zealand’s Public Enemy Number One but he is in a good place. It may be because he has a fondness for Dublin, which goes back to 2005, when he was billeted for a week with the Carroll family from Blackrock as a 16-years-old. But the last time he was here, in 2009, they drew 20-20 with Ireland in Croke Park.

“I look at a draw and think of it as a loss,” he says. “When you have the game in the grasp of your hand with 30 seconds to go that proves the point that you have to play right to the 80th minute. That was a great lesson for us.”

By the way things have turned out, a lesson for Quade Cooper too.

1 Australian rugby staring into abyss as another crisis hits
2 Six Nations rugby needs to be protected for terrestrial TV
3 My favourite sporting moment: Game, set and couch as Borg takes down McEnroe
4 Dr Claire Molloy: ‘It is a privileged place to be, on the frontline’
5 Garry Ringrose to stay with Leinster as he signs two-year central contract
Real news has value SUBSCRIBE