‘There was only one host, England, so only one team should enjoy home advantage’ 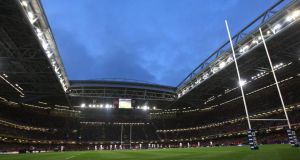 The Australian and Irish RFU had to intervene to stop Wales from playing World Cup games at the Millenium Stadium. Photograph: Billy Stickland/Inpho

Australia had to fight a boardroom battle to avoid facing Wales in Cardiff during the group stage of the World Cup in October, it has emerged.

Although England are the official hosts of the tournament, several games will be staged at the Millennium Stadium in Cardiff, including Wales’ games against Fiji and Uruguay.

Wales, keen to face the Wallabies in the famous Cardiff atmosphere, had made a commercial case for the Australia game to also be played there instead of the match between France and Ireland, citing ticket sales and accommodation.

However, John O’Neill, the former chief executive of the Australian RFU and a World Cup board member, successfully fought against it.

“The point I made was: there was only one host, England,” he said in The Times. “So there should only be one team who should enjoy home advantage.

“If the hosting rights had been spread, the argument disappears, but the Millennium Stadium was just included as another stadium.

“I didn’t think it was fair to have home-ground advantage going with it. The principle was to ensure that all visiting teams were treated equally. The end result is a good one.”

Australia’s case was also supported by Peter Boyle, the former president of the Irish RFU who sits on the council of World Rugby.

“I certainly raised it,” he said. “Was it fair for Wales to host that game? When Wales were allowed to participate in England’s hosting, it was raised as an issue that they wouldn’t be given an advantage.”

The match could be critical, with Group A already branded the “Group of Death” as it includes England, Wales and Australia, with only two quarter-final places on offer.

Wales and Australia will now meet at Twickenham on October 10th.

England, as hosts, will face Australia at the same venue on October 3rd.