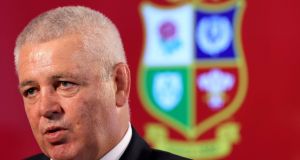 Warren Gatland will fly to America on Friday to watch the Maoris play the USA and then Ireland face an All Black team he believes has taken the game to another level.

The Lions coach, who has been crunching some numbers from the global positioning system (GPS) readouts that all teams now wear, believes the record-setting New Zealand side are 20 per cent to 30 per cent better in the metrics used to measure player performance than any other national team.

“What we found is definitely the All Blacks have taken the game to another level. The GPS numbers from the World Cup to the Six Nations has increased by 30 per cent,” said Gatland.

“I’m talking about total metreage covered in the game. We have a high-speed metre measure for when players get to 80 per cent of their maximum speed and they were doing that 20-30 per cent more than in the past.

“They are going into a zone or something – I’ve done it myself as a player. Players play and become familiar with it and then all of a sudden you go and play at another level and that’s where the All Blacks have taken the game. Not physically, but the pace and the intensity of the game and the speed that they play the game at.”

Joe Schmidt and Gatland have similar challenges ahead. Both are taking their respective teams to another country with just sketchy preparation to play the best side in the world, Schmidt now facing a side that have effectively been in camp all summer long.

The Lions tour seems particularly daunting. When World Cup-winning coach Clive Woodward was in Dublin recently, he looked at the schedule and observed that a Lions coach obviously had no hand or part in making it.

Being deliberately counter-intuitive and casually insulting to Steve Hansen, Gatland also says despite their record 18-game winning streak, this may not be one of the greatest New Zealand teams. “Anyone in New Zealand could coach the All Blacks and you would be guaranteed an 85 per cent win record,” he says. The sound in the background is Hansen’s jaw hitting the ground in Chicago. “So it’s not a bad team to be involved with.

“They are an absolute quality side and they have got a lot of things right at the moment. The players are playing with real confidence and freedom and, like I said, they tend not to panic if they are behind.”

The vexed question of how to beat them is probably not one Gatland can truly answer. While Wales came close last June, they fell short in Auckland, Wellington and Dunedin.

Argentina did the same during the summer but there is a chasm, or a mental step up, teams this year have failed to take. “That’s the big challenge,” says Gatland. “We [Wales] experienced being right in the game for the first 60 minutes. In the first Test, we should have scored before half time and that would have given us a lead . . . Argentina have done well against them for 60 minutes. One of the things the All Blacks do is they make changes early in the second half. It’s pretty much a 23-man squad for them.

“I know you guys don’t watch a lot of cricket but the only analogy is that it is kind of like a batsman facing someone at 80 miles an hour. But then he comes face to face with a bowler who is bowling at a 100 miles an hour. It doesn’t matter how much practise he has done, a 100-mile-an-hour bowler is going to cause him some problems.”

He sees the gap in intensity between Pro12 and Premiership rugby with international rugby as too great. The southern hemisphere players have a narrower gap to close.

“The All Blacks, the New Zealand teams, have a huge advantage in terms of those local derbies and the five super sides playing each other home and away,” says Gatland. “I mean that’s unbelievable preparation for All Blacks on tour.”