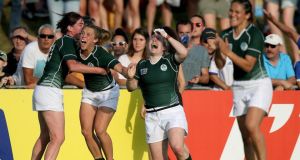 In a quiet moment late last night Philip Doyle visibly winces when it was mentioned this achievement has the Irish women crossing the Black Rubicon before their male counterparts.

“Lot of history there. Joe Schmidt was here today. I was talking to him during the match, believe me! He came close last year.

“Look, there is just an inner belief among the girls. For the public, they have to realize it is a group thing. All of us, every tiny point of a percentage that everyone puts in has led to this victory.”

Before this unforgettable game, in this excellent setting, both squads were warming up on the shaded pitch beside the main arena.

Low dipped Ailis Egan, Gillian Bourke and Fiona Coghlan. Straight backs, locking the pack with one menacing groan. The Kiwis heard it as they whipped the ball between them with impressive rapidity.

That now feels like one of those tiny percentages.“The girls buy into it, they live it, and where this is going to end I just don’t know,” Doyle continued. “But today is a good day.”

Immediately after the full-time whistle we had to choose between cornering Johnny Sexton or Schmidt. Opting for the latter, as he has taken a few sessions with the Irish women, he kindly obliged.

What won it, Joe?

“I just think their defence in the first 10 minutes after half time, when they were massively under the pump, when they just stuck to their job, defending deep inside their own 22,” he said. “That’s takes a big measure of preparation, of discipline and also determination.”

Ireland were supposed to lose, simply because of the gulf in professionalism between the sides, but New Zealand’s professionals play Sevens all year round. That proved a weakness as this contest descended into a set-piece war of attrition.

Certainly for Alison Miller’s decisive try, when Selica Winiata chipped out of defence and into the welcome arms of Niamh Briggs. That and her touchline conversion was what chinned the Black Ferns.

“I’ve seen them train and they are a massively spirited, courageous group but there are some fantastic leaders out there as well. The likes of Niamh and Lynne Cantwell out wide. Nora and Tania around the half and girls like Jenny coming on and making a difference. Fiona always doing a great job up front, and Sophie too.”

Being a Kiwi, he had a special word for the contribution of Ireland’s natural born openside wing forward Claire Molloy and the work she did over the ball.

“And when they didn’t get that penalty try [on 16 minutes]that’s when I think they knew, ‘Hang on a minute, we are good enough’. The set- piece pressure in those early exchanges had to give them confidence to go and win it at the back end of the game.”

New Zealand coach Brian Evans also gave the victors due credit. “You can only stand back and congratulate them,” said Evans. “We thought we had them at the start of the second half but credit to the Irish, we kept on hammering their try line. It just didn’t happen.”

As far as tactical blueprints are concerned, Schmidt and Evans both doffed their caps to Doyle.

Beforehand he stated his intention to target the New Zealand lineout and two steals in the opening exchanges so clearly rattled them.

“I keep going on about the bloody belief. We just bought into it.”

Right now it feels like a bigger achievement than the Grand Slam.

“No, it’s not,” Coghlan corrected, captain and taliswoman in both instances. “It is a huge against-the-odds win but we are here to win a trophy and it is only step two.”

Step three comes on Saturday against Kazakhstan. Victory there is expected and that means Ireland would top Pool B with New Zealand scrapping Australia, France, England and Canada for the best runners-up spot in order to reach the semi-final on August 13th.