If only the World Cup was in Russia: Ireland could do with the cold 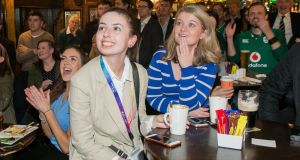 At least there was no epic retreat from Russia to add to the shock reverse against Japan. But it was somewhat subdued crowd that crammed into the Woolshed sports bar on Dublin’s Parnell Street to watch Ireland’s latest faltering steps towards a possible Rugby World Cup quarter final.

The combination of a weekday morning, the lingering hangover of Fukuroi, and the imminent arrival of Storm Lorenzo meant there was only a smattering of green jerseys.

Reflecting the civvies that most people wore, this was at best a workmanlike performance, restoring business as usual after the Japanese debacle. Despite the perfect start, when Rob Kearney scored Ireland’s earliest try in world cup history, the performance never threatened to turn the restrained mid-morning pub session into a party.

One of the few who did turn up in an Ireland shirt – and it was a shirt with a story – was veteran RTÉ broadcaster Roy Willoughby, now retired and teaching English as a foreign language at a place in Temple Bar (“opposite the Leprechaun museum,” he laughed).

Twenty-eight years ago, he had the job of asking Ireland captain Ciaran Fitzgerald what it was like to have a world cup semi-final spot snatched away by a last-minute Australian try after Gordon Hamilton’s heroics had brought us to the brink. Now he feared that the latest attempt to reach that promised land was proving very attritional even in the group stages: “You’d have to be worried about all the injuries we’re picking up.”

His fellow TEFL teacher in the English Studio, Darragh Gallagher (“mention that we’re unionised,” he said) preferred to dwell on the nil Russia had scored against us than the 35 points to which Ireland eventually laboured: “At least we got our defence right today.”

As for the Willoughby shirt, that had been a gift from his old employers, albeit by accident. His son John managed to get tickets for the audience of the Late Late Show recently and won the jersey, promptly passing it on to his old man: “I wore it to school next day.”

There were no Russians to be seen in the pub. Maybe they were undercover. Or perhaps the bookies’ predictions of a 52-point margin had persuaded them to stay at home, assuming the Dublin-based expatriates have any interest in rugby.

Not even the famed Russian intelligence had picked up information about public gatherings of their rugby fans for the game. Or at least, when the Irish Times rang to ask, the embassy didn’t know of any.

But guests of the nation in the Woolshed included Uruguayan IT student Celia de Léon, who works at another well-known Dublin bar, McSorley’s in Ranelagh. Ireland did nothing against Russia to match the heroics of her home country, whose defeat of Fiji last week is still the biggest story of the World Cup.

Still, she and boyfriend Andy Kenny agreed that they’d done enough (“they looked a bit more focussed today”, he thought). So even though her name does sound very like “Celine Dion”, as she conceded, nobody was asking her to sing the theme from Titanic, just yet.

Another of the few who had worn the green jersey was David Cordial, a Dubliner who owes his unusual surname to ancestors in Tipperary (although they must owe it to somewhere else). A GAA man primarily – he has played corner forward with St Vincent’s – he regrets discovering rugby too late in life to play it: he’s the grand old age of 26 now.

But having taken the day off work as a software engineer, he watched the action from Kobe with great intensity, and thought it was a “messy game”, while also being “job done” in the humid conditions, with which the team were clearly still struggling.

Subverting the national stereotype, he pointed out, this Ireland side (like Dublin in GAA) thrives on structure and precision, rather than in the chaos that the greasy ball and pitches seem to be encouraging.

“They say you should never invade Russia in winter, and maybe you shouldn’t invade Japan in summer either,” he concluded. “But actually, we’d do better in Russia.”