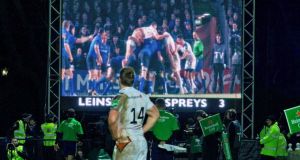 Referee Roman Poite watches the replay on the big screen before showing a red card to Ian Evans of Ospreys. Photograph: Morgan Treacy/Inpho

Ospreys lock Ian Evans could miss at least part of Wales’ Six Nations title defence after he was sent off for stamping on Mike McCarthy’s head last night.

Evans, whose Wales second-row partnership with Alun-Wyn Jones has been a key element of recent international successes, was dismissed by French referee Romain Poite after television replays showed Leinster forward Mike McCarthy being stamped on.

Evans, 29, is now set to face a disciplinary hearing next week, with the range of suspensions for stamping starting at a fortnight and moving up to nine weeks or more for a top-end offence.

Wales kick off their Six Nations campaign at home against Italy on February 1st, before tackling Ireland in Dublin seven days later.

Evans, who will join Heineken Cup holders Toulon next season, has won 32 caps and was one of four locks named in Warren Gatland’s Six Nations squad alongside Jones, Luke Charteris and Andrew Coombs.

Reflecting on the first-half incident after the game, Ospreys backs coach Gruff Rees said: “It was a big moment, but I’m not sure about it to be honest, like a lot of observers, I think.

“Perhaps it was a bit reckless, but there were a lot of replays needed to make a decision, which suggests it wasn’t that clear and obvious.

“It took five or six times in slow-mo to isolate the incident. I don’t know if that’s clear and obvious from a red card point of view, and it changes the game.

“You have to be absolutely certain with a red card, and that there were so many replays and there are still so many differing opinions on it suggests that the clips may not have been totally conclusive.

“I think when it does get slowed down to the nth degree, something worse can be made of it.”

Back-row forward Ryan Jones, who was returning to action following a calf muscle injury, limped off shortly after Evans’ departure then hooker Richard Hibbard did not appear for the second half due to what is understood to be a shoulder problem.