On preparing to face Clermont: O’Gara’s last Munster game and Paul O’Connell is in a fiery and inspirational mood 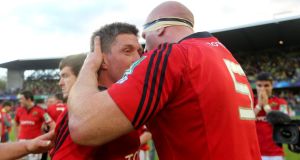 Conor’s a good lad and a hard-working lad. I said to him in the warm-up, “This is a great opportunity now, against Parra and James, this is where we’re going to get an advantage. You fucking destroyed Parra in the Aviva,” I reminded him. “More of the same now today. He doesn’t like playing against you.”

I could see him literally growing in front of me. He kind of thought about it and said, “I fucking manhandled him.”

I think Morgan Parra does have a small bit of a doubt playing against Conor. Parra was good that day, but by his standards he was quiet enough, while Conor worked unbelievably hard and had a big game.

I went through my kicking, and I was relaxed and going well.

The Munster fans were all to one side of me and shouting “Come on, Rog!” and so on. You can feed off that.

Suddenly the French crowd were going mental. Booing echoed around the ground, and I see the big red monster, Paulie, running across the pitch.

The twice-weekly Midi Olympique rugby paper had demonised him all week, using still photographs from television pictures of him kicking Dave Kearney during the Leinster game a couple of weeks before.

I put out my hand, and as he ran by he slapped it and shouted, “Let’s fucking kill these *****, Rog!” It was fucking special. He nearly knocked my fucking shoulder out of its socket with the force of his high five.

I’d say he hadn’t expected it at all and yet his initial reaction was “Bring it on! We’re going to fucking do it today!”

I loved it. He was fit to play all right. He was ready to go there and then, and there was still half an hour to kick-off!


Fitness test
Paulie had told the senior players the night before that he was doing a fitness test at 9.30 am. It had been in my head all night, and when I came down to breakfast I asked Bryce Cavanagh.

“What’s the story with Paulie?”

I thought, “what the hell is he playing at so?” I hadn’t thought about it since, and then Paulie’s reaction to the booing gave me confidence.

Back in the dressing-room there was a good buzz, with a nice focus. Before the majority of games much of what’s said is noise, and sometimes fellas say things as much for themselves as for everyone else.

This must have been one of those times, because I only remember saying something like “Lads, we’ll be on the ropes, but don’t break. Don’t fucking break. Just hang in there. I’m telling you they’ll have fucking purple patches, but do not break. Just let them be the first fuckers to break. You might think we are being steamrollered at times, but just don’t break.”