Hayes relishing playing with his Con band of brothers 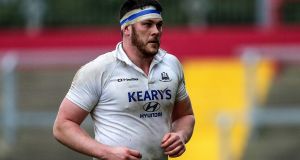 Brian Hayes: “To get to come back to a club like Con, where you have the core that has been there since I joined . . . it makes a big difference.”Photograph: Laszlo Geczo/Inpho

When first he gave up on his dreams of playing for Munster and then put aside his aspirations of being a professional rugby player, Brian Hayes could easily have walked away from the game.

But next Sunday, against Clontarf, the 28-year-old lock is playing in his fourth successive final for Cork Constitution at the Aviva Stadium. It’s been as rewarding as he could have hoped.

Having played mini-rugby at Sunday’s Well, he played for Cork Con’s under-12s before completing his time with CBC Cork by captaining to their 2009 Munster Schools Senior Cup triumph.

After a year in the Munster sub-academy, Hayes completed three years in the province’s full academy. But with Paul O’Connell, Donncha O’Callaghan, Donnacha Ryan, Billy Holland, Dave Foley and Ian Nagle competing for second-row slots, Hayes was restricted to two appearances against the touring Wallabies and the Dragons in November 2010.

He opted to join Aurillac for two years under Jeremy Davidson. There were offers from other ProD2 clubs but, with a commerce degree in UCC behind him, he did a Masters in e-business before securing a job with Accenture in Dublin.

“Rugby in Ireland is a bit weird. I would have had a big GAA background. I would have been Nemo Rangers; would have grown up in that sort of atmosphere. I’d identify with a club more than anything else.

“I grew up around rugby around the time Munster had that team that were doing everything so well. All you care about playing for then is Munster and Ireland. Then you get to the age of 24/25 and you realise your options are ProD2 in France. It’s not as enticing as going out wearing the red jersey or the green jersey.”

“To get to come back to a club like Con, where you have the core that has been there since I joined – the likes of Noel Walsh, Stan Waldron, Doug O’Riordan, the fellas that are always putting the club forward – it makes a big difference.

“It’s a cliché, but you play with your friends and we’ve the same team for the last four years.”

Con lost to Clontarf in 2016 before beating them a year later and then losing to Lansdowne 12 months ago. But whereas last year they finished third, this season they topped the table with a record 73 points, registering a dozen try-scoring bonus points (five more than last season).

“Paul Barr [head coach] came back in this year and we changed a lot of the way we played. Compared to the usual, rely on the pack and hitting up Niall [Kenneally].”

“It’s evident in the way we played the league this year, the standings and how that ended up. By the same token, we’ve been on the other side of it. Finishing fourth and won the league. In the last four years, we finished the top-four in four different positions every year. It would be a waste of 18 good games to turn around and go back down the road without the cup, as they say.”

Con are also playing to their strengths out wide, where they have Ireland Under-20 Grand Slam winner Seán French, a try-scorer in last week’s semi-final win over Trinity, and the Munster academy duo of Irish 7s star Shane Daly and Alex McHenry, a son of former professional golfer John.

Hayes likens French to Jacob Stockdale. “You give him the ball and you expect a try,” he says.

Clontarf are familiar foes in the final and arrive on the back of two convincing wins over Lansdowne.

“They started like a house on fire and then had that bit of a [rough] patch, but as I said it’s two games you need to win really when it boils down to it. Get into the top-four and if you get in there with 40 points, it’s all the one. You just need to win two games.”