April 15th, 2019: Rugby Australia (RA) is set to terminate Israel Folau's contract over a social media post saying gay people would go to "hell" if they did not "repent". 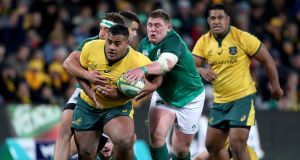 The trial of Israel Folau is threatening to drive a wedge through the Australia rugby squad in a Rugby World Cup year, with prop Taniela Tupou saying all Pacific Islanders “might as well” be sacked for their Christian beliefs.

The case is seen as a formality, with Rugby Australia and the New South Wales Waratahs already publicly committed to terminating the lucrative contract of their best-known player.

The saga could, however, prove divisive in a squad that contains at least one high profile social progressive in David Pocock but also a heavy representation of players who, like Folau, are devout Christians with Pacific islands heritage.

Tongan-born Tupou made clear his position when he took to Facebook late on Tuesday in response to a report that his Fiji-born Wallabies team mate Samu Kerevi had apologised on Instagram after posting about his “love” for Jesus before Easter.

“Seriously? Might as well sack me and all the other Pacific Islands rugby players around the world because we have the same Christian beliefs?,” wrote the 11-cap forward.

“I will never apologise for my faith and what I believe in, religion had nothing to do with rugby anyways?”

The governing body has also declined to comment on Folau’s case since announcing Saturday’s hearing, which was requested by the player after he was served with a breach notice that said he had “disrespected” people on the basis of their sexuality.

RA’s hardline stance has been backed by Wallabies coach Michael Cheika and a number of senior players, including captain Michael Hooper.

However, Folau, born to Tongan parents, has had support from Pasifika players who share his religion.

Players with Pasifika heritage made up nearly half of Australia’s matchday squad in their last test against England in November, so the result of Folau’s code of conduct case could have significant implications for team harmony.

On Tuesday, Kerevi felt moved to clarify his “apology” for his social media post, saying he was not apologising for his faith or in response to the Folau controversy.

“God will always come first in my life and many other professional rugby players,” he said.

“Today I felt things were taken out of context in regards to certain articles. I do not feel obliged to apologise to people because of the situation happening right now with a brother of mine.”