Ireland U-20s set to deliver on potential against Italy 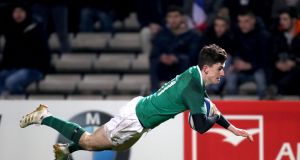 There is a balance to be struck between rectifying the imperfections in last week’s 34-24 defeat to France and deriving satisfaction and impetus from a largely excellent second-half performance in Bordeaux.

Noel McNamara’s team merited a losing bonus point after fighting back from 22-3 down to trail 27-24 as the match reached a conclusion only to succumb to a sucker punch, a late converted try.

There was much to admire in the manner in which a young Irish team adhered to their attacking patterns that yielded a couple of tries to wing James McCarthy and scrumhalf Johnny Stewart to supplement the penalty try awarded when fullback Michael Silvester was tackled without the ball.

Stewart and flanker Matthew Dalton are required by Ulster for a Pro14 match so Hugh O’Sullivan comes in at scrumhalf with Patrick Patterson coming onto the bench. Sean Masterson excelled as a replacement against France and wins the starting role while Matthew Agnew is another new face in the back row.

There is one further change to the team with Angus Curtis, son of former international David, coming into the Irish midfield in place of Dave McCarthy. Former CBC Monkstown tighthead prop but now a hooker, Eoghan Clarke, comes onto the bench as do UCD pair Charlie Ryan and Ronan Foley and St Mary’s College pivot, Conor Dean, a son of Irish senior team manager and ex-Ireland and Lions outhalf, Paul.

Italy make three changes to the backline and one at tighthead prop along with a couple of positional switches to the side that produced a fine performance before losing 27-17 at home to last year’s Grand Slam champions, England.

The Italians only trailed 8-7 at half-time before shipping two tries in as many minutes that effectively decided the outcome. They possess a strong scrum and as they demonstrated last weekend an excellent lineout maul.

The last two matches between the teams have been shared – Italy winning by a point in a 2017 World Cup match while Ireland prevailed by the same margin in the corresponding fixture last season.

If Ireland can make the incremental improvements required, particularly in defence, then they can anticipate a different outcome to the French result.