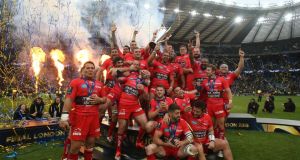 So Toulon are entitled to be labelled the European Cup’s greatest ever team? For a club which only competed in one Heineken Cup prior to its current three-in-a-row, when making the quarter-finals in 2010/’11, before muscling its way into European and French rugby’s elite thanks to the chequebook of the comic book millionaire Mourad Boudjellal, that somehow sticks in the craw a little.

They are a hard club to like. They always seem to be agitating for something or rowing publicly with somebody, be it with governing bodies or referees in the fallout of defeats. With their often narrow, ultra-physical game, they can also be hard to watch, but it has to be said they are a bloody hard team to beat – the hardest the European Cup has known. That is why they’ve won nine Heineken Cup knockout matches in a row. That’s why they won five cup ties at the end of last season to claim what is effectively a unique French-European double.

Bernard Laporte and Boudjellal have harnessed a winning culture by bringing together a collection of serial medal haulers who are mostly unencumbered by Test demands, and who buy into the club’s proud history as a hotbed of French rugby.

Their pre-match “Pilou Pilou” can grate, but the Stade Felix Mayol is as atmospheric a rugby ground as there is on the planet, and the way they form a human corridor to greet the home team is a wonderful pre-match ritual. All in all, you also have to say they have spiced up French and European rugby, and it would be a duller world without them.

Admittedly, this was something of a last hurrah for the current team. Carl Hayman, Bakkies Botha and Ali Williams are all retiring at the end of the season, and Chris Masoe is joining Racing Metro. That is half of last Saturday’s starting pack.

Furthermore, Laporte is stepping aside as Diego Dominguez takes over the reins as head coach, although few doubt Laporte will not retain a very “hands-on” advisory role next season. In any event, they are not going away, and are simply intent on replacing retiring galacticos with new ones. So it is that Quade Cooper, Ma’a Nonu, Clermont winger Napoloni Nalaga, Springbok and Stormers number eight Duane Vermeulen and Northampton number eight Samu Manoa are likely to join.

What’s more, Laporte assured one French journalist in the aftermath of Saturday’s win over Clermont at Twickenham there will be “more news” about another big signing in the imminent future. “Everybody wants to play for Toulon now,” claimed Laporte, and recalling how, for example, Shane Horgan and Alan Quinlan suggested the very same when analysing their 60-22 win at home to Ulster, there’s probably an element of truth to this.

Boudjellal and Toulon, along with other club owners, have helped raise the financial rewards for professional rugby players in both hemispheres, and that’s no bad thing. For example, Johnny Sexton, Seán O’Brien and Jamie Heaslip are probably all earning more than they would be if it hadn’t been for the presence of Toulon and Racing Metro in the market place.

Nor, for this reason and more, would anyone begrudge Paul O’Connell were he to relocate to Toulon for an autumnal swansong to his career. Of course that eventuality remains highly unlikely, and his public utterances suggest he is inching toward retirement after the World Cup, but certainly he owes Munster and Ireland nothing. It would clearly be an adventure, while adding enormously to his experience, all the more so if he were to step into coaching, and Toulon clearly know how to manage players in the twilight of their careers.

Racing Metro are becoming more of a force as well, but Toulouse appear to be fading, and few of the other French clubs are as equipped to compete on two fronts. Almost inconceivably, Toulouse could also be without Guy Noves next season as he is one of the three front-runners, along with Raphael Ibanez and Fabien Galthie, to become the next French coach. Apparently, he feels he is no longer wanted at Toulouse, and he is the preferred choice of Serge Blanco, although the French Federation president, Pierre Camus, is the final arbitrator and he is thought to favour Ibanez.

For sure the force is currently with the French clubs, all the more so given their new €70-million-a-year deal with Canal+ for coverage of the Top 14, while the leading English clubs especially are becoming richer and burning with ambition.

The Irish provinces are not a million miles away though. They were never likely to maintain their dominance of 2006 to 2012, when winning five Heineken Cups in seven years, and for the last three seasons, as usual, they’ve been disadvantaged by away semi-finals (as has been the case in 10 of 13 Irish/French semi-finals). Yet here’s one scary thought. Imagine the boon for the English or French club game if either England or France won the World Cup? Yikes.