Thomond Park gets its voice back as Munster see off Saracens 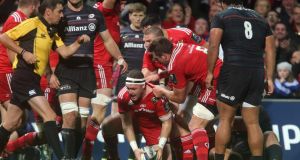 New tournament, same old Munster and now same old Thomond Park as well. After a few hiccups hereabouts in the league towards the tail end of last season and the start of this season, this was a revival of the old Limerick fortress for a good old-fashioned Anglo-Irish arm wrestle

Once again Munster returned for the second-half fray an improved outfit after re-assessing with the Munster think-tank, and once again the Irish team’s fitness levels held up impressively against their Premiership counterparts.

Whereas last week Munster won the second-half 20-3, in a stifling game so taut it was almost suffocating, here they won the second period 11-0, and perhaps significantly denied Saracens a bonus point in the first win by more than a score in six clashes between the sides. In truth it might have been put more, but after last week’s heroics and four from four haul, Ian Keatley left 11 points behind with a two from six return.

This was back-to-basics Munster cup rugby, honed by Shannon and number eights like their head coach, Anthony Foley, and their manager Niall O’Donovan. A narrow focus on hugely intense close-in carrying and recycyling – epitomised by Paul O’Connell, Tommy O’Donnell, CJ Stander and the entire pack – and plenty of aerial stuff by Conor Murray (again the fulcrum) and Keatley as Munster prioritised territory.

The midfield shored itself up, and the back three and especially Andrew Conway contributed handsomely to a gameplan founded like all Munster’s best wins, on a 15-man work ethic. Their scrum was big too, as BJ Botha predictably responded to his recall with a fired-up display.

Certainly the crowd didn’t seem bored, and the pitch looked a picture on a lovely night for rugby, although despite the official sell-out there was a fair smattering of empty seats in the East Stand.

Neither side was initially inclined to go through too many phases, preferring instead to exit their own territory rather than risk giving up the first score.

The speed of Saracens’ defence – borderline offside – and their ball-and-all tackling gave Munster little choice as Murray and Keatley tested the Saracens back three.

For their part, Munster sought to stifle Saracens with low chop tackles, no doubt with Billy Vunipola primarily in mind, with the next man in, often Peter O’Mahony, able to at least slow ball down.

Although not all of the Munster up-and-unders were on the money the quality of their chasing game kept Saracens under pressure. The recalled Pumas centre Marcelo Bosch did have a shot from long-range before Keatley hit the upright after Richard Barrington prevented the ball being released, and the chasing Conway gathered only to be denied a touchdown by the alert Jamie George.

A good Munster lineout enabled Keatley to open the scoring on 27 minutes, but Saracens’ response was impressive. Off a scrum penalty and a lineout drive, they went through the phases before Owen Farrell, who missed four penalties on his previous visits here, hooked a close-range penalty from the left wide.

Undeterred, Saracens went through 14 phases for Farrell to land his second shot, although Keatley should have had the final say of the half when Botha and co earned a scrum penalty only to miss a second time to leave a taut game level at the interval just three-apiece.

Soon after the resumption, Chris Ashton made the game’s first clear line break with one of his trademark trailers onto an Alex Goode offload before his kick to the corner beat fellow in-form winger David Strettle into touch. Murray, such a hugely influential player for Munster, didn’t help his team by over-cooking three box kicks in a row, thus relieving the pressure on Saracens, as he briefly lost his radar, although he soon found it again.

As influential these days is Stander, and when poaching in trademark style he was tipped over by half-time replacement prop Rhys Gill, who was duly binned as Keatley put Munster back in front. It felt like the night’s turning point and Munster set about making sure it was.

They scented blood, and went through multiple close-in phases with Stander, O’Connell, Simon Zebo and co offering themselves as one-off runners, pumping their legs in contact with support pods ensuring recycles. As Leinster and, eventually, Sale discovered, it is very hard to defend. When Murray went blind to Conway, he appeared to score only for the French TMO Eric Gauzins to bizarrely adjudicate the winger knocked on.

It was but a temporary reprieve, Munster cleverly switching the point of attack with their ensuing lineout drive from a Dave Foley take, as O’Mahony, Tommy O’Donnell, the stoic Duncan Casey and co peeled off to the blindside for David Kilcoyne, just on the pitch, to clearly score without any recourse to the TMO.

Back came Munster once more, even after Gill’s return, with a reprise of their narrow-channelled but unrelenting multi-phase attacking; a couple of carries by Stander and Kilcoyne especially defying belief and culminating in Keatley tapping over a drop goal with an advantage.

Unfortunately for him, Keatley pushed another kickable penalty from a scrum wide but Munster saw out the endgame without undue bother. Ultimately, this was a fairly solid win.