Munster winger says his side have learned to take their opportunities 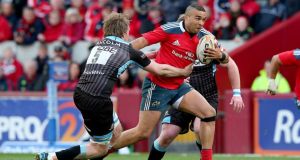 One of the common themes emerging from the Munster camp is of learning from lessons past, and especially last year’s Heineken Cup 16-10 semi-final loss to Clermont in Montpellier. It is an especially relevant yardstick for Simon Zebo.

Not much fazes the Martinique/French-blooded Cork winger, who invariably speaks of never becoming nervous, merely excited at the prospect of a big game, and it is the same again this week. Yet running into the Yellow Brick Wall that was the Clermont defence a year ago – until Ronan O’Gara began to brilliantly dink the ball in behind them – appeared to be one of the few games that clearly frustrated him.

“Yeah it was very, very frustrating,” he admits, laughing at himself as much as the memory. “You’re right on the ball there saying that was one of the only few [games]. We left opportunities out there and it was one of those games where at the start of the week everyone was writing you off so much and you haven’t got a chance and all this and then come minute 75 you’re like ‘Why aren’t we in front? We should be able to win this game?’”

“Having not played an unbelievable game you’re still in with a shout of beating probably one of the best teams in the world at that stage and it was unbelievably frustrating. So hopefully as a squad we’ll have learned from our mistakes and be able to right some of the wrongs we had last year.”

“We know we can’t afford to wait 20 minutes into this game or else we’ll be blown away. Last year we came out of the blocks a little too late and we suffered in the 80th minute. We just came up short. We’d be looking to come as early as we did to Toulouse and hopefully lift the pace and up the ante in the first 20 and hopefully that should give us a chance of being in there or thereabouts at the end of the game.”

Easier said than done in Marseille compared to Thomond Park, but if Munster can take one positive from last year’s loss, it was the way they withheld Clermont’s first-half storm when many a team would have been blown away.

“They’re such a strong outfit that at some stage in the game for some 10, 15 or 20 minute period where they’re on top, we’ve just got to hang in there like Ali on the ropes,” admits Zebo. “We know this is coming. We know what to expect and we have to take full advantage of our period when we’re on top of them . . .”

Indeed, if Rob Penney has imbued this remodelled Munster team with anything, it is a sense of adventure. And Zebo would be the most natural disciple of such an approach. “I think these occasions can pass you by in the blink of an eye so if you try and stand off and play conservative and kick the ball away the whole time . . . We really have to go out and play . . .”


Mentally fresher
With Leinster being the bulk suppliers to Ireland’s Six Nations, their below par performance against Toulon made it appear as if they went to the well but the well had run dry. By contrast, a chunk of Munster players including Zebo himself should be both mentally fresher and feel they have something to prove. Sure enough, the prospect of facing Toulon in the Stade Velodrome had Zebo beaming.

“These kind of games I get more excited for so it wouldn’t really affect me. Mentally it wouldn’t make me feel like going to a daunting place. It’s exciting and I just want to get my hands on the ball even more so. Having said that, we did have quite a young squad last year and as a whole we weren’t used to going to the south of France and playing in such a crazy atmosphere as Clermont, and no doubt it will be similar with the Toulon fan base there this year.”

Asked where his game is at compared to the same point last year, Zebo initially says: “It’s a bit different I suppose,” before laughing and correcting himself. “Actually it’s a bit similar. I was coming back from injury then too! The tail-end of the season is always a part of the year where I get most excited. It’s been a bit frustrating having missed so much of the season this year and last year with injuries . . . The excitement levels are very high and I’m feeling very fresh and raring to go.”

A firm hard pitch, warm and dry conditions, in the south of France should be to his taste too. “Definitely, I’ll have the mouldies on and be able to glide across the grass and hopefully just get as many touches as I can try and try and cause some havoc in their defence . . .”