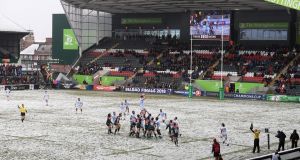 A general view of a lineout on the snow covered pitch during the European Rugby Champions Cup match between Leicester Tigers and Racing 92 at Welford Road. Photo: Stu Forster/Getty Images

Leicester regained some pride after a poor European Champions Cup campaign by pushing Racing 92 all the way before going down 23-20 in their final pool game.

The Tigers, who have now failed to reach the knock-out stage in three of the last four seasons, finished bottom of their pool for the first time but at least produced a battling performance at Welford Road.

Brendon O’Connor scored their only try, the other points coming from the boot of George Ford, while scrum-half Maxime Machaneaud starred for Racing. He scored 18 points, including a try, the other being scored by Henry Chavancy.

Leicester played their final match of a dismal European campaign in a half-empty stadium in freezing conditions, and on a snow covered pitch.

Having finished bottom of their pool for the first time in their history, the Tigers were playing for pride only and fielded a virtual full strength team after making 13 changes to the side thrashed 39-0 at Castres.

Leicester, the most successful English side with 20 major titles, including two European Cups, were aiming to avoid an eighth defeat in nine games but made a disastrous start and trailed 14-0 after just 11 minutes before fighting back with nine unanswered points before half time.

It all looked too easy for Pool 4 leaders Racing, who won the home fixture 19-15, after they scored two tries in four minutes.

Centre Chavancy got the first following a driving maul from a line-out and then scrum-half Machenaud doubled the lead when he touched down after the ball squirted out of a scrum near the Tigers line.

Referee Nigel Owens watched several replays before awarding the try, and with Machenaud converting both, Racing looked in the driving seat.

But the French side failed to capitalise and Leicester slowly grew into the match. Although they did not create any chances, England fly-half Ford kept them in the game with penalties in the 17th, 28th and 39th minutes.

Seven minutes after the restart Leicester levelled. Ford turned down the chance of three points from a penalty and kicked for touch, and from the catch and drive flanker O’Connor got the touchdown. Ford missed the conversion.

Winger Jonny May appeared to be taken out in mid-air by full back Brice Dulin when fielding a Ford cross-field kick before Machenaud put Racing back in the lead with a 54th-minute penalty. The visitors immediately brought on former All Blacks fly-half Dan Carter.

Ford and Machenaud kicked two penalties apiece as the teams went into the last nine minutes tied at 20-20.

Machenaud put Racing 23-20 ahead with a 76th-minute penalty and in a dramatic finish Leicester turned down the chance of a penalty to go for the win but Racing held out.