Neil Doak: Ulster must shuffle deck ahead of Oyonnax 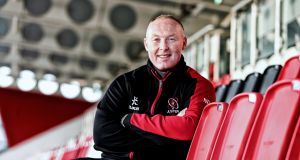 “We know it’s going to be a massive physical challenge, especially against a French side, and we’ve got to make sure that we’re disciplined,” said Neil Doak. Photograph: Matt Mackey/Presseye/Inpho

Although best placed of the Irish trio to advance to the knockout stages after their superb back-to-back wins over four-time winners Toulouse, Ulster have kept changes to a relative minimum in those Toulouse matches and the ensuing festive derbies against Connacht and Munster.

“We have to look after the guys,” said Doak, despite admitting this was a must-win game in terms of their qualification chances. “There are guys who are probably going to be involved in the Six Nations squad and there are other guys who we probably need to rotate. It’s Europe and away from home, so it will give us a little bit of an opportunity to do that. Some guys are starting to get to the edge of things.”

There is likely to be a change at halfback, given Ruan Pienaar has started Ulster’s last seven games and Paddy Jackson their last eight; even allowing for the bye week brought about by the postponement of this Oyonnax game from round one due to the Paris atrocities.

Paul Marshall, after his match-turning introduction off the bench in the win away to Connacht, is due a start, as is Ian Humphreys.

Andrew Trimble has started the last six games, and Stuart McCloskey and Luke Marshall the last five in midfield, and bearing in mind ensuing European games at home to Oyonnax and away to Saracens, not to mention the Irish management’s desire for player welfare as the Six Nations looms, that trio are unlikely to remain ever present over the next three weeks.

Ulster’s options are limited by the injuries to Darren Cave, Stuart Olding, Tommy Bowe and Peter Nelson, and although Craig Gilroy and Jared Payne are expected to return sooner rather than later, “that’s not looking as likely as it was a couple of weeks ago”, said Doak. Of the two, Gilroy is closer to a return, with Payne not in the mix yet.

Doak also indicated that 20-year-old academy centre Sammy Arnold could be in line for his European debut, amid further concerns also about fullback Louis Ludik and winger Rory Scholes, each of whom suffered swollen ankles against Munster, while Ulster are also awaiting a scan on Wiehahn Herbst’s calf injury.

“If you look at teams who have gone there [Oyonnax], they’ve found it difficult if they haven’t looked after the ball.”

After their historic promotion in 2013, and then surviving by the skin of their teeth in their first Top 14 campaign, Oyonnax finished sixth to reach the playoffs last season when beating all bar Toulon and Clermont at home, before losing 20-19 away to Toulouse in le barrage.

However, Oyonnax’s three- year stay in the top flight looks seriously imperilled after switching to an all-weather pitch at their Stade Charles-Mathon this season, where they have won three and lost three domestically, while managing one losing bonus point in six games on the road.

Oyonnax sacked their head coach, Olivier Azam, in October after six defeats in their opening eight games. He had succeeded Christophe Urios after eight years at the helm, and there have been signs of an upturn under former scrumhalf Johann Authier.

The last of those wins, by 25-22 over Stade Francais, ended a run of six defeats in both competitions, but after last weekend’s 24-17 loss in Grenoble they sit 13th and six points adrift of safety.

“They’re got some dangerous broken-field runners,” said Doak. “They’ve actually got a pretty experienced side; Stan Wright, Pedrie Wannenburg, [Soane] Tonga’uiha, Piri Weepu, and a few French guys who qualified them for Europe. They’re definitely not to be under-estimated. They’ve got nothing to lose and if any French side gets some momentum, gets their maul going and then the crowd get behind them, you can be under a lot of pressure.”

Citing their win over Stade Francais, Doak said: “We know it’s going to be a massive physical challenge, especially against a French side, and we’ve got to make sure that we’re disciplined. Like every game, we want to win, and this game is no different, and if we can do our basics well and make sure we are a little bit more clinical, it will give us a good chance of getting the win.”

John Egan the hero for Sheffield United again, Stephen Kenny eager to get going 07:25
Ireland-based Stephen Kenny can offer FAI welcome stability 06:00
Felipe Contepomi: Lockdown a double-edged sword for the likes of Johnny Sexton 06:00
Sonia O’Sullivan: Running in a bubble as the shoe wars raged 06:00
Joanne O’Riordan: Return to play is fraught with perils and possibilities 06:00
Crossword Get access to over 6,000 interactive crosswords