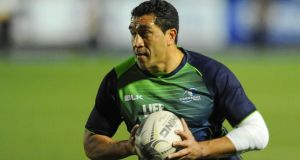 This needs to be the night Mils Muliaina rolls back the years. It could easily be the night his buckled wheels roll into the category of yet another imported rugby legend punctured by faded greatness.

That’s the high standard expected of a centurion All Black, above all because he commands a salary, supplemented by the IRFU, which could have covered the cost of a mere 60 academy players.

Either way, after an injury-broken season Muliaina leaves for Zebre this summer.

“He’s nice and refreshed, he got a couple of days off and I’m sure he badly needed it, mentally and physically,” said captain John Muldoon.

“He’s a massive player for Connacht rugby, he’s done outstandingly well for Ireland over the last couple of weeks and he’ll bring a huge boost to us coming back. Robbie is Robbie, he’ll fit right back in.”

Both teams come off the back of disappointing, comprehensive defeats to Sale (23-6) and Munster (42-20).

“It is a huge game for the club and if we want to win it and progress in the tournament we will have to bring our own physicality to the game,” said Gloucester director of rugby David Humphreys.

“We’ve known for a while the European campaign was something we could take away with us from this season.”

Brendan Macken, on loan from Leinster, doesn’t make the squad but Humphreys has loaded his ranks with Six Nations returnees. Winger Jonny May, scrumhalf Greig Laidlaw and hooker Richard Hibbard all add quality that Connacht will struggle to match. There is also John Afoa and James Hook at outhalf to consider as a tortuous night is promised for Connacht who cannot have the same interest in this tournament as Gloucester.

Considering Gloucester are barely clear of relegation trouble, winning the Challenge Cup is their best route into Europe’s top tier.

Not that Connacht will wilt entirely but Gloucester look far too strong.

Wolves complete loan signing Willian Jose from Real Sociedad 13:36
Sungjae Im takes lead in California after flawless round of 65 12:34
‘Frozen and unfit for racing’ - Saturday’s Navan fixture cancelled 12:07
Munster can conjure spirit of 2011 as Leinster come to town 07:00
Beibhinn Parsons ignoring the noise as uncertainty surrounds 2021 06:45
Crossword Get access to over 6,000 interactive crosswords