Leinster ushered towards exit as Munster cling to lifeline

What is now normal service has been resumed, and it’s not what it used to be 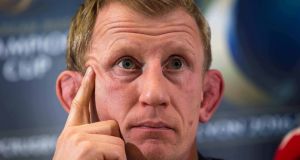 Leo Cullen: ‘We couldn’t get any real flow to the game second half’

It’s all over now for the blues. After the inspiring pick-me-up of Friday night’s double by Ulster and Connacht, what sadly now passes for normal service was resumed over the remainder of the weekend.

Whatever about Munster’s defeat at home to Leicester, there was no shame in losing 24-9 to the expensively assembled three-in-a-row champions in Stade Felix Mayol yesterday, but with it came an exit from a tournament that Leinster won for a third time in four years just four years ago.

Back then, what set them apart was their handling and skills. Not any more, it doesn’t, and it certainly didn’t here. There didn’t seem to be too much wrong with the game plan, and Leinster exposed weaknesses out wide in the Toulon defence and lineout, while also scrummaging well. But they have now scored one try in four hours of European rugby this season.

Leinster will be unhappy with Welsh referee Nigel Owens’s interpretations on the tackler releasing and Steffon Armitage et al not supporting their own body weight. But deserved yellow cards for Cian Healy, Devin Toner and Tom Denton compounded their ill-discipline, which also smacked of a lack of leadership.

“Pretty frustrating,” was how Leo Cullen described it all. “I thought there was a lot of good effort in parts and we couldn’t get any real flow to the game second half. Disappointing.”

Of course, the damage was done in the opening home match against Wasps and the scrum carnage of Bath. The net effect is that Leinster are effectively out, having lost their first three matches in the European Cup for the first time ever.

No team has ever progressed from such a start, and Leinster won’t be an exception. Next Saturday’s marquee fixture, for which 42,000 tickets have supposedly been sold, is now a dead rubber.

“Yeah, it’s going to be difficult, clearly,” Cullen said. “For us, it’s a very short-term focus. We’ve a game in six days, the ticket sales were announced there last week, and if we get something like 45,000 people to the Aviva watching us, for the players and the management it’s about preparing as best as we possibly can so we can give a better account of ourselves in front of that amount of people that are coming out to support us. So, that’s very, very short-term focused, and we can reassess post-that.”

In essence, therefore, the one-time European kingpins will be playing for pride next Saturday.

The rash of penalties at the breakdown proved “very expensive”, Cullen conceded. “We’re a team that doesn’t give away penalties like that normally. I think we have had three yellow cards this season, but to have three in the one game is pretty costly. Especially away from home. We have had this trouble before, so again it is the interpretation. We just need to be better dealing with that.”

Cullen also conceded that the amount of handling and kicking errors had been costly. “We talked about it in the lead-in to the game, about giving them easy access. That is what they feed off. It’s certainly an area we can be better at.”

“It was a very tough game,” said Bernard Laporte, when briefly beginning his post-match briefing in English. “Leinster are a very good team. We knew before the game, and we know now.”

Thus, to avoid going out in the pool stages for the second season in a row, Munster will need to maintain the curious nature of meetings between these two one-time European heavyweights by making it three wins from three visits to Welford Road next Sunday.

For all his misgivings about the decision by Romain Poite and his officials in the build-up to Leicester’s first try by Nike Goneva (“it was nothing short of a disgrace”) and the “disappointing” kicking of a wayward Ian Keatley, Anthony Foley was a little nonplussed as to how Munster could lose a game with more than 60 per cent possession and territory.

“You want to win your home games. It is very important to get out of the group, and we have just given ourselves a mountain to climb,” said the Munster coach.