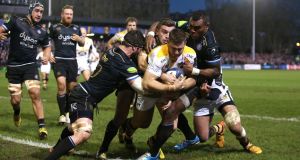 Jimmy Gopperth of Wasps holds off the Bath defence to score a try during the European Rugby Champions Cup match at the Recreation Ground in Bath. Photo: David Rogers/Getty Images

Outhalf Jimmy Gopperth scored 23 points as Wasps recorded a second away win of their European campaign to remain firmly on course for the knockout phase.

After suffering a dramatic late defeat against Pool Five rivals Bath in Coventry last Sunday, Wasps proved in no mood to let history repeat itself, winning 36-10 at the Recreation Ground.

Gopperth claimed a try, while the New Zealander kicked four penalties and three conversions – he also added the extras to centre Elliot Daly’s first-half touchdown and a late Alapati Leuia try – with Daly slotting a drop-goal and leaving brittle Bath sunk without trace.

The home side, who have still to face Champions Cup holders Toulon home and away next month, now face an arduous task in terms of quarter-final progression. But they could offer few complaints after being heavily outgunned in the forward exchanges and seeing the early promise of a Semesa Rokoduguni try quickly evaporate.

A much-vaunted Bath back division – with the exception of an excellent Rokoduguni – struggled for fluency without a consistent platform up front.

And even Rokoduguni’s afternoon ended in disappointing fashion when he was sinbinned by French referee Romain Poite for a deliberate knock-on, as Bath’s poor Aviva Premiership form this term transferred to a European environment.

Wasps, though, lead the group with three wins out of four, and Bath need to regroup quickly, or their European and domestic campaigns could slip into anonymity sooner, rather than later.

Last weekend’s opening European clash between the clubs produced a thrilling finish when Bath won in added time, and the west country club started where they left off, breaching Wasps’ defence after just 10 minutes.

Wasps struggled to cope with a sustained spell of Bath pressure that saw their forwards patiently go through the phases before centre Kyle Eastmond delivered a scoring pass to Rokoduguni.

George Ford added the touchline conversion, yet it proved to be a solitary highlight of a fast and furious opening quarter for Bath as Wasps took charge through a fierce scoring blitz that produced 13 points in five minutes. Daly broke away to touch down after Bath spilled possession in midfield, before Gopperth converted and then punished poor discipline by kicking two penalties.

And it did not get any better for the home side as their skipper Francois Louw limped off, with Gopperth then completing his penalty hat-trick to open up a 16-7 lead.

Bath were at sixes and sevens, with their forwards enduring a torrid time, and it came as no surprise when Wasps moved further ahead before half-time.

Number eight Nathan Hughes proved their attacking catalyst, capitalising on shoddy scrum work by Bath, before possession was quickly moved wide and Gopperth touched down for a try that he also converted.

Bath’s set-piece woes of the opening 40 minutes eased, and a George Ford penalty made it 23-10 midway through the second period. A further Gopperth penalty, though, restored a 16-point gap and there was no way through the Wasps defence as the visitors finished strongly with 10 further points.

Doubts continue over Solskjær’s tactics against high-class opponents 13:16
Waterford women’s football association ‘first in Ireland’ to own lands 13:00
Time decided football was finally over for Brees. Not for Tom 12:53
Phil Neville to step down as England head coach with immediate effect 12:23
Chiefs survive loss of Mahomes as Brady wins battle of the veterans 12:04
Crossword Get access to over 6,000 interactive crosswords