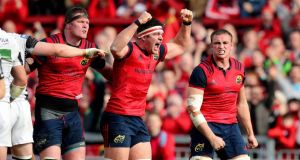 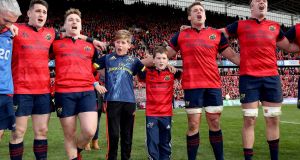 Tony and Dan Foley, sons of the late Anthony Foley sing with the Munster players after the game. Photo: Dan Sheridan/Inpho 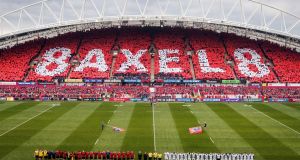 A view of Thomond Park as the two teams stand for a minutes silence. Photo: Ryan Byrne/Inpho

Not so much a game, more a memorial service, but in the end, some match too. As a province, as an organisation and finally as players, Munster could not have paid a finer tribute to Anthony Foley than with this remarkable bonus point win, achieved with 14 men for over an hour.

When Keith Earls was harshly red-carded by Jerome Garces for a tip tackle on Glasgow hooker Fraser Brown, Munster led 14-3 and the crowd may have briefly feared the worst. Brown’s elbow hit the ground first, and then he landed on the top of his back, not his head. It looked an unjust result which might spoil the day and the occasion.

But Munster were already into their zone and two tries to the good by then, and carried on regardless, ultimately outscoring their numerically advantaged opponents by another three tries to two.

In honour of Foley, Munster produced their best performance for a long time.

The carrying into contact over multiple phases was sharp and aggressive, as was the clearing out. Inevitably, CJ Stander, who wore the number 24 jersey in light of Munster’s decision to rest the number eight jersey for the day, led the way and Peter O’Mahony had a fine hour while Tommy O’Donnell put in his usual unstinting shift of tackles, carries and clear-outs. But they were all immense really, and with everyone itching to be involved, there was good impact off the bench.

All the while, Conor Murray and Tyler Bleyendaal masterfully pulled the strings at half-back while Rory Scannell came on a ton for his run-out at the Aviva, and on his full debut, South African Jaco Taute gave a performance which will have reminded some of Trevor Halstead.

The crowd were signing the book of condolences and assembling in the stands and terraces from 11.30am, and half an hour before the kick-off it was announced that the commemorative match programmes had been sold out. The proceeds will be donated to a fund or charitable cause to be agreed upon by the Foley family, with support from Munster Rugby.

Both the Glasgow and then, more raucously, Munster squads were applauded off the field after their warm-ups, and after a video tribute to Foley on the big screen, Munster took to the pitch in commemorative jerseys. The minute’s silence was impeccably observed.

No one doubted that Munster would be seriously charged for this affair, but they brought controlled, purposeful emotion to the game too. Appropriately, Munster made early inroads off the game’s first line-out maul after a long punt by Simon Zebo forced Stuart Hogg to find touch on half-way.

Despite the distance from the Glasgow line, no sooner had Peter O’Mahony gathered Niall Scannell’s throw than the crowd were calling for the drive. “Heeeeave!” they implored. And how the Munster pack did, driving beyond the Glasgow ten metre line. He’d have approved of that.

Better still, Tyler Bleyendaal then pierced the Glasgow defence from a lovely offload by Earls, rounded Stuart Hogg and was helped in his roll over the line by Conor Murray. Bleyendaal converted too.

Stand up and Fight

Garces penalised Rory Scannell for going off his feet, from which Finn Russell opened Glasgow’s account, but back came Munster with a big scrum. From the penalty into touch that followed and the hooker’s over throw, CJ Stander made a superb poach and David Kilcoyne and Niall Scannell carried in turn, before Tommy O’Donnell broke the defensive line with his footwork and pace.

Eventually, going right to left, Bleyendaal passed out the back to the sweeping Rory Scannell and Taute scored in the corner. Bleyendaal, who had made some start to the game, landed a fine conversion.

The mood of the game and the day then changed dramatically when the Glasgow hooker carried at Earls, and was lifted, turned mid-air and landed on his back. Garces, as is his wont, took an age in reverting to his TMO, and for some reason also had to walk to the end zone in front of the big screen from half-way. Eventually, to a mixture of disbelief and anger, he brandished a red card at Earls, who made his feelings known to the Glasgow players who had sought to seek retribution and thus instigate an all-in flurry of pushing and shoving as he walked off the pitch, exchanging shoves with the ever lippy Hogg.

But while the mood may have changed, Munster’s supremacy and steely-eyed focus remained. A huge shove by the Munster pack forced the Glasgow scrum to buckle, travel backwards and disintegrate, to a thunderous roar, and home team and crowd alike drew further energy from Bleyendaal’s ensuing penalty, which made it 17-3.

When Russell then kicked the ball dead from inside halfway, off the ensuing scrum the Warriors outhalf was stepped and left for dead by Rory Scannell’s inside break. The centre then passed to Zebo, who took Hogg’s tackle and swivelled for the line after the full-back’s schoolboy-ish failed attempts to tug Zebo’s foot over the line.

After another interminable wait, Garces eventually awarded the try and again Bleyendaal converted from the touchline.

Rather remarkably, they even turned down another shot at goal to go up the line in search of a bonus point before half-time, but this time their maul was driven into touch and had to be content with a 24-3 interval lead.

They didn’t have to wait long into the second-half though. Having re-gathered the kick-off, Munster went through sustained charges and recycling to within inches of the Glasgow line, and Murray was just held up at the foot of the post.

So too was Stander from the ensuing scrum, and Munster sensibly went for another put-in when the Glasgow front-row stood up. It served to soak up time, keep the squeeze on the visitors and attempt to maximise sorties into the opposition 22.

Two more penalties later, Monsieur Garces marched in between the posts to signal a penalty try, and Bleyendaal’s conversion made it a rather remarkable 31-3.

Finally, Glasgow began to make their numerical advantage tell, and worked an overlap for left-winger Rory Hughes. But Zebo, who is a brilliant covering defender by his corner flag, tracked him down and helped by Darren Sweetman, tackled him into touch.

However, when Glasgow mauled infield off a line-out, replacement hooker Pat MacArthur peeled off to score, and with Munster down to 13 players as one of their number received treatment, Sweetman tracked Sean Lamont before reading the offload and tackling Stuart Hogg, before eventually Mark Bennett scored.

At 31-17, there was a hint of Glasgow getting something out of this game, but Munster were having none of it, a fine passage of ball retention and hard running culminating in Billy Holland trucking it up, and from the quick ball that followed Murray skip passed to Rory Scannell on the touchline, who fended Lamont’s tackle to finish well. Ian Keatley, on for Bleyendaal, even managed a superb touchline conversion.

As the players exchanged handshakes, it was time for one more rendition of The Fields of Athenry. Everyone had stayed, needless to say, and everyone in the near capacity crowd joined in.

It has never ever felt more powerful. The players came out onto the pitch along with Foley’s young sons Tony and Dan to reciprocally applaud the crowd. Tears were shed and embraces shared before the entire squad and some of the management formed a huge circle along with the boys and sang Stand Up and Fight, their post-match custom after a home win in the dressing-room being taken outside their normal, more personal place. The crowd went quiet, and then joined in for the final chorus.

The squad then conducted a lap of honour. They didn’t rush it. Even by now, pretty much everyone had stayed. The players stopped off to shake or slap hands with a line of young Shannon players at the Ballynanty end of the ground.

They disappeared into the tunnel to a final roar. It couldn’t really have been much better.