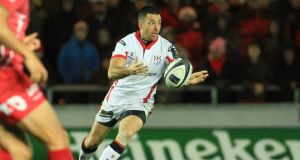 Ulster’s Ian Humphreys: “You have to fight that bit harder for recognition and respect, not in a bad way, but you know you are on your own.” Photograph: Darren Griffiths/Presseye/Inpho

The last decade has shown that club loyalty in rugby is only as strong as the contract. The business of sport has ensured that.

Leaving, as Johnny Sexton did to Racing Métro and as Ian Madigan will do to Bordeaux-Bègles, is a wrench but despite what IRFU high performance director David Nucifora has said, perhaps no real handicap. Change has helped some players to kick on.

Ian Humphreys, who was one of the pioneers of the bailout a decade ago along with Leo Cullen, Shane Jennings, Eoin Reddan and Geordan Murphy, believes in the positivity of movement.

Madigan’s decision to leave Leinster for Bordeaux at the end of the season could be as beneficial to Ireland as the moves of Tommy Bowe to Ospreys or Reddan to Wasps.

Reddan left Munster ten years ago, as did Humphreys for Leicester. The following year in the 2006 Six Nations Reddan was capped for the first time. When Bowe went to Ospreys in 2008, he was quickly transformed into a try-scoring machine.

“You look at somebody like Tommy Bowe. Tommy thrived in Ospreys, really kicked on when he went there. Ospreys were winning and they were competitive and when Tommy went he really exploded,” Humphreys says. “Their back line had [Gavin] Henson and Shane Williams, and Tommy was brought out of his comfort zone. He was able to learn different things and week in week out he began to score tries for fun.”

Madigan’s move has again shown that players are increasingly thinking of the short career. At 26 years of age, more game time (and salary) in a different set-up could be a transformative experience.

“Leicester definitely gave me a harder work ethic. If you didn’t have that attitude, you were found out,” says Humphreys. “You couldn’t get away and there was no acceptance of sub-standard. It was a huge, huge eye-opener for me when I arrived.

“It’s great to get used to a different environment, a different culture with different team- mates and a different coach, and all away from your home comforts. You go in as a foreigner and it’s more difficult. You have to fight that bit harder for recognition and respect, not in a bad way but you know you are there on your own.

“Pat Howard was the coach at Leicester at the time I arrived over and he was a great coach. He was one of the first coaches into the fine details of rugby, the sort of detail Joe Schmidt is renowned for these days. He was really good at that aspect 10 years ago when few if any were doing it.”

In his first season with Ospreys, Bowe scored a club-record four European Cup tries in a match against Treviso, as well as becoming the leading league try-scorer.

Former Ireland and current Wales coach Warren Gatland signed Reddan to Wasps in 2005, where he succeeded England’s Matt Dawson to become first choice scrum-half. With them Reddan won a Heineken Cup in 2007 and the 2008 Guinness Premiership as well as captaining the side during the absence of Lawrence Dallaglio in 2007-08. His career was far from damaged.

“When I arrived at Leicester I remember one guy being pulled out of rugby to do gym for a year. I thought that was horrendous. For me there is no replacement for playing rugby. Playing is a different level and you can see that in young guys coming in,” he says.

“Maybe I’m getting a bit old now, but I still believe that you cannot beat playing a little bit of rugby. I definitely think game time is very important.”

Humphreys’ exit was different in that he had no contract with Ulster when he moved and was also seen as a sevens player. Nor was he involved in the Irish set-up as Madigan has been.

Playing outhalf in the World Cup is pretty central, and Madigan’s decision, possibly like those of other Irish players such as Tomás O’Leary, Peter Stringer, Gavin Duffy and Johnny O’Connor, is also shot with the feeling of being spurned.

“It was a no-brainer for me,” says Humphreys. “My brother David was there, Paddy Wallace, Adam Larkin. ”

Madigan knows that tune and it doesn’t have to be a eulogy.