Anthony would do anything for you on the field. And you wanted to do the same for him 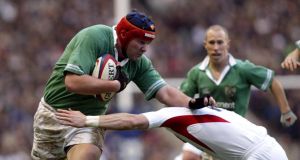 Anthony Foley hands off a tackle from Iain Balshaw at Twickenham in 2004. Photograph: Billy Stickland/Inpho 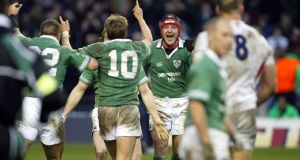 But with Anthony’s tragic passing Munster have lost a piece of themselves they can never replace.

The culture he helped create yielded victories in southern France that had previously been 50-point trouncings. That came from Foley, from Shannon and the AIL.

I played against that Shannon team. I played against Anthony, Alan Quinlan, John Hayes and Mick Galwey for Lansdowne and for Leinster when they became Munster. I was also lucky to train and play alongside them with Ireland.

It was also about Garryowen, Cork Con and Young Munster but the winning mentality born out of Shannon’s four-in-a-row success played a huge part in Munster’s belief system where no team was unbeatable. No team anywhere, no matter the odds or size of them. That fed into Ireland, Leinster took what they could from it too.

In Paul O’Connell’s book there is a story that explains what it all means. Paulie is a young man playing AIL for Young Munster against Dungannon and ten seconds into the game Paddy Johns pinned him down, fist on neck, at a ruck. For the next 80 minutes O’Connell fought Johns telling him to retire, that he was a has-been. Behaviour that would disgust him now but Peter Clohessy loved it, he wrote. O’Connell was trying to impress Claw.

Same as most young Munster players during those years, all striving to gain the respect of Anthony Foley, Gallimh and Claw.

Culture can’t be taught, it has to be learned. That’s what Paulie was doing; learning the Munster way.

Foley knew all about it from infancy. He was a clear link from those amateur Munster days all the way to the podium in Cardiff in 2006 when he lifted the Heineken Cup. Without him, I’m not sure any of that would have been possible. His presence was that important and remained so in recent seasons as head coach, especially the toughest nights when he shouldered so much of the responsibility.

The old AIL culture evolved, as did Axel, through the professional era. That was a great struggle because the amateur days were not about having the highest standards off the pitch or a clearly defined game plan on it - it was about being brothers in arms in the face of supposedly superior England and French sides.

Munster won all those tough matches on the road and in Thomond Park because of their unity. They defended and looked after each other completely. That was a time in rugby when a rare team like them could overcome so much just by standing together and fighting as a team.

It was still a great Shannon then Munster pack, with serious athletes like David Wallace and Quinny (ball carrier and spoiler facilitated at every turn by Foley), hugely powerful men like Hayes but their number eight’s rugby intelligence was crucial.

Axel just knew when to get the ball away from a scrum, he never put Stringer under undue pressure. His timing and decision making was impeccable, he always knew where to be. I saw something similar up close on a daily basis with Isa Nacewa - rarely anything spectacular but never doing anything wrong. But you knew the spectacular was possible when you see such consistency.

We had a wonderful day together at Twickenham on March 6th 2004. After losing a mad encounter in Paris and beating Wales at home, overcoming the world champions on their own patch was something no Irish team had ever done before.

We played rugby at a phenomenal pace that season. Foley, as our number eight, was central to so much of it. There were patterns under Eddie O’Sullivan’s coaching that are best shown by Girvan Dempsey’s try.

On first glance it looks like Girv’s try came off a break up field by a young centre before some rapid recycling allowed our fullback to dive over in the corner.

Look at it again. Look at the essential role Axel played when Mal O’Kelly threw up that offload. There is no luck involved when it comes to being in the right place at the right time in rugby. Axel tracked the ball, initially on Keith Gleeson’s inside shoulder in midfield as play seemingly moved past him.

But look again. Before Shane Horgan throws a reverse pass to O’Kelly the camera shows Axel speeding up. Then he is out of shot. Then he is there, slowing from full pace, ball sticking like glue, shoulder dipped for the first contact into Paul Grayson as Ben Cohen and Iain Balshaw are needed to drag him down three yards from the England line.

Stringer sends play back left, where there is an overlap, and myself then Brian know to throw long passes out to find Girv.

That try is not possible without Axel’s brain, hands and leg drive. If he didn’t make a five metre gain Girv gets put into touch.

The first Triple Crown for 19 years followed. It belonged to all of us but Shannon and Anthony Foley can take enormous credit.

Go all the way back to the maul that led to my initial break. Axel is first to pop out and track the play several strides away from the other forwards. He just saw things before your average rugby player ever did.

I really liked my friend Liam Toland’s article about his friend on Monday: “He’d never burden you with the three tries he scored against Biarritz in Thomond Park or that he could spin passes off both hands or drop kick off either foot as well as any international back.”

We didn’t see much of this from Axel because he was hidden away, toiling, making the hard yards. But the subtleties of his game were there and that proved hugely beneficial when coming up against powerful number eights like Lawrence Dallaglio or Scott Quinnell. I would have put Foley in the same category as Richard Hill for influence on a game. You wouldn’t see much of him and didn’t really know what he is doing. It’s only afterwards, in the video room, that you realised he was responsible for creating the space you were expected to exploit. It meant you were responsible to him, you owed him for all that punishment he was taking.

I played against Axel since 1998. Was lucky to get to train alongside him and get to understand that dry, sharp sense of humour. As a young man I didn’t quite understand there was a warm intention behind his manner. The penny dropped eventually. It meant he would do anything for you on the field. And in return you wanted to do the same for him.

Last time we met was at the Aviva stadium the week before last. It still feels weird going down pitch side (to do television) for a Leinster v Munster game and not having anything to do with the actual game. Then I saw Axel and we both changed the path we were on. I was met by a warm smile and handshake. For a split second we were teammates again then, for another instant considering the day that was in it, sworn enemies.

Just a little moment that I now realise can never happen again.