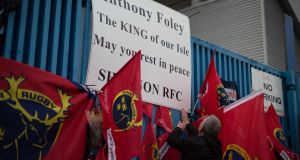 It’s too soon. It can provide little or no comfort to the people who have been heartbroken the most. It’s about more than a rugby match and yet not only is not a normal rugby match, the result has never seemed to matter so little.

At its core though, this match is of course about no ordinary man, much less an ordinary player, so it is thus an opportunity to pay a poignant tribute to Anthony Foley. While it’s too soon, it’s fitting that it is at Thomond Park and in the European Champions Cup. It is also fitting that Sky Sports will be here, for they are synonymous with Munster’s search for their Holy Grail, and have, as you’d expect, compiled a classy and moving tribute to the iconic number eight in red.

Anthony Foley’s passing has reverberated through the rugby world. Over in France, Clermont Auvergne’s supporters club have asked that they all wear red for their game at home to Bordeaux/Begles, which follows this one. A classy club. Toulouse are doing something too, and there will be a minute’s silence or applause before all games in the European Champions and Challenge Cups.

From 11am, Books of Condolence will be open for all supporters in the Fan Zone under the East Stand and in the MRSC bar. A special commemorative match programme, documenting Foley’s life in rugby and the tributes paid to him in recent days, will be on sale at the ground with a percentage of proceeds going towards a fund or charitable cause to be agreed upon by the Foley family with support from Munster Rugby.

A minutes silence will be observed during which a special tribute to Foley will take place in the West Stand. On the pitch before kick-off, the Munster Rugby Supporter’s Club Choir will perform the Shannon anthem There Is An Isle, and soprano Sinead O’Brien will join the Choir to perform Stand Up And Fight.

As Ronan O’Gara suggested yesterday, it would be fitting if the entire class of 2006 were in attendance. It’s been a while since Thomond Park was jammed to the rafters. It would be fitting if it was again. Time was when Thomond Park was noted for its Saturday tea-time kick-offs. Let’s be honest, Saturday tea-time works best because well, crowds are more lubricated. This will be sober, raw and all the more genuinely highly charged for that.

Heaven knows how the Munster players will cope less than 24 hours after singing There is an Isle and Stand Up and Fight at the funeral for their teammate, coach and brother. One ventures it will be a charged, but uneven performance.

As we said here a few days ago, spare a thought for Glasgow as well. Gregor Townsend and his assistant, the former Connacht coach Dan McFarland, were amongst those in attendance in Killaloe yesterday. In a touching, they too laid a wreath outside Thomond Park yesterday.

Munster have made one change from the side originally named to face Racing 92 last Sunday. Having completed his return to play protocols, Keith Earls returns and starts on the left wing.

Meanwhile, Sean Lamont and Alex Dunbar come into the Glasgow Warriors starting XV. Lamont replaces right winger Leonardo Sarto, outstanding last week in the bonus point win over Leicester, and Dunbar, who was a late withdrawal ahead of last weekend’s victory due to illness, will start at outside centre at Thomond Park.

Glasgow’s performance looked like that of a team on a mission to make it into the last eight of the European Cup for the first time ever. They will have braced themselves for an emotionally fuelled, energetic home performance.

But for how long can this last? Who knows. Munster could be anything today, but you’d have to wonder how long the emotions can drive them. You’d have to think there will be lulls, or at any rate that they can sustain the kind of 80 minute performances that are required to beat a quality side like Glasgow.

Under Townsend, Galsgow are more advanced in what they are about. It was the season before last in the final of the Pro12 when they underlined now more advance their attacking game is, and they hit those heights last week against Leicester, even if two of their five tries were intercepts.

Many of the work-ons from Munster’s defeat against Leinster are fixable, not least protecting the ball better in contact, and being smarter with their carries in using their feet and seeking softer shoulders, as opposed to seeking full-on collisions. And if anyone will have detected them and suggested remedial action, it is assuredly Foley. They’ll have remembered everything that he told them in the week that followed.

Maybe Munster will find the inspiration, but this has been an unimaginably draining week for them. However they perform will be an achievement in itself.