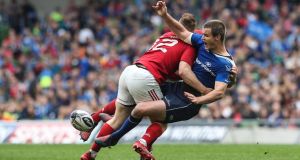 Time was when nothing whetted the appetite quite like the return of what we knew and loved as the Heineken Cup.

In its stead, the European Champions Cup returns for its third instalment since the damaging rift that spawned the tournament’s re-structuring, with little evidence so far that its rebranding, re-formating, relocation to a Swiss outpost in Neuchâtel, and its carved up satellite television coverage, has delivered better tournaments.

Indeed, entering its third season, there are still only two of the promised five commercial partners and the Challenge Cup will again be devalued by not awarding the winners a place in next year’s Champions Cup – further entrenching its second-tier status.

One ventures that had Derek McGrath and the old ERC still been in charge, he and they would have been lacerated by English owners such as Bruce Craig and Mark McCafferty, and their UK-based fan club.

With only one side each from Wales and Italy, this season’s Champions Cup certainly has even less of a pan-European feel than last season, when an Anglo-French carve-up resulted in the absence of any Pro12 team in the last eight for the first time.

Maybe this has coloured our view on this side of the Irish Sea, but even the organisers and one or two UK scribes now accept that the Irish teams, and their supporters, were missed.

We and they need at least one to progress to the knockout stages but a cursory glance at the betting confirms the power shift. The first seven in the betting to win outright come from the Premiership and the Top 14, with Leinster next at 22/1. Ulster and Munster are both at 40/1, with Connacht 100/1.

Saracens, who have begun this season as they left off last season’s all-conquering, double-winning campaign, welcome back Owen Farrell for Saturday’s seismic visit to dethroned Toulon, and Mark McCall’s team are entitled to start favourites, with Wasps perhaps a bigger threat than the French contingent.

All four Irish sides are also third in the betting to win their pools. Yet Leinster, especially, look stronger contenders than that, and certainly ought to be more competitive than last season when losing five of their six pool games; their worst showing in the 20-year history of the competition.

Not only do they not have the distractions and demands of a World Cup – when they had 21 players on duty – but have clearly been given more direction by the pre-season input of Graham Henry andthe arrival of Stuart Lancaster.

Despite losing Marty Moore, they have a strong scrum, with impact off the bench, a well-oiled lineout, and options aplenty in the back-row with Seán O’Brien returning. There’s also Jamison Gibson-Park’s arrival and the form of Luke McGrath, and most of all the well-being, fitness and form of Johnny Sexton, while Robbie Henshaw’s debut last week in tandem with Garry Ringrose offered huge hope.

Granted, the retirements of Luke Fitzgerald and Niall Morris have dulled their cutting edge and their attacking game is still evolving, with Isa Nacewa still their main finisher.

They face the dual French challenge of Castres, European underperformers with nine successive pool exits and 19 out of 20 away defeats in the cup, and Montpellier, who are led by South Africa’s World Cup-winning coach Jake White. But Leinster have a good record against French sides, winning 19 of their last 21 home games against Top 14 teams – the exceptions being Clermont and Toulon at the Aviva.

Northampton are familiar foes too, and while showing some signs of life lately, have made a humdrum start to this campaign after last season’s decline. But Leinster look at least as well-balanced as any of their rivals.

As last week’s derbies illustrated, Ulster and Connacht possibly bring more X-factor. Despite their spate of injuries, Ulster can still field a stellar backline with Ruan Pienaar evidently mustard keen to sign off his seven years in Belfast on a high, and Charles Piutau as good a match-winner as any in the competition.

The pity is that following the loss of Nick Williams, Marcell Coetzee arrived injured until the new year, thus depriving them of ball-carrying ballast up front. They need Iain Henderson to up his game, while assistant coach Joe Barakat’s departure in December is unfortunate. A point separated their three pool opponents last season along with the Ospreys, and Ulster can be at least as competitive as the Welsh region.

Similarly, the loss of skills coach Dave Ellis midway through the campaign is untimely for Connacht, but his legacy will live on in the skills’ levels he has helped to inculcate out west. That in turn means they could be more competitive than in their previous attempts.

Munster bring prosaic abilities to the table, and while many of last week’s errors can be rectified, losing Keith Earls for their opening assignment against the French champions Racing Metro and a renewal of acquaintances with Ronan O’Gara further dilutes their potency in the continuing absence of Francis Saili.

As Rassie Erasmus jokingly conceded at the tournament launch: “You look for the easy games in your pool, and when you examine this group you quickly realise that you are the easy game. We have to change that perception.”

Like Leinster, as bulk suppliers to the World Cup, Glasgow should be more cohesive this season when they kick off the competition at home to Leicester tonight. A win at Scotstoun would be a statement on their behalf and that of the Pro12.

But, for Munster, after consecutive failures to emerge from the pool stages, thanks in the main to home defeats against Clermont and Leicester, extracting something from Paris and restoring Thomond Park’s fervour a week later against Glasgow would seem imperative if they are to remain in contention.

Baby steps. For the moment, remaining in the hunt until and beyond the December back-to-back rounds will do.