Northampton winger will be assessed by independent medical specialists 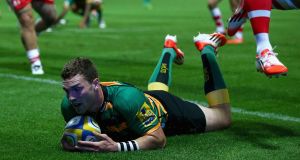 George North of Northampton will not play against Leinster on Friday night. Photo: Clive Mason/Getty Images

George North is out of Northampton Saints’ Champions Cup match against Leinster at Franklin’s Gardens on Friday night (7.45pm). The Lions and Wales wing appeared to be knocked unconscious in an aerial collision with Leicester Tigers Adam Thompstone last weekend but after being examined by the club’s medical team was cleared to resume in the game, which he did.

The club originally issued a statement in the aftermath saying that he had suffered a neck issue but on Tuesday afternoon clarified their position. “As at every Premiership match, the Saints’ medical team has access to video footage to be used to assist the pitch side assessment of injuries.

“It is important to note this video footage is not always the full range of replay angles available to the TV viewing audience at home. If evidence suggesting a loss of consciousness had been available to the medical team at the time of assessment, George would not have been allowed to return to the field of play.”

He has been stood down from all rugby until he has been assessed by independent medical specialists given his previous history with concussion issues.

There was better news for the club relating to former Ireland underage international JJ Hanrahan, who made a successful return from a fractured fibula at the weekend in Northampton’s defeat to the Tigers. The Kerryman, who sustained the injury last September, played at inside centre before being replaced after 68 minutes.

The 24-year-old’s versatility - he can also play outhalf - could win him a place on the bench against Leinster at Franklin’s Gardens in the absence of England’s Under-20 World Cup winning star, Harry Mallinder, who is out until January after undergoing ankle surgery. Hanrahan will battle Ken and George Pisi for a place in the centre alongside England international Luther Burrell and Stephen Meyler for the number 10 jersey.

The Saints are hoping that their influential French number eight Louis Picamoles will shake off recent aches and pains to be able to take his place in the team.

Northampton are coming off the back of successive defeats to the Newcastle Falcons and the Leicester Tigers but fullback Ben Foden is not too dispirited. “”I think it’s a new competition, a new chapter, a new challenge. We’re still in it, we’ve only won one and lost one so though we were disappointed with our last performance against Castres, we’re at home against Leinster so hopefully that will help.

“They’re a good outfit Leinster; they’re a quality side, especially in the European Champions Cup so we need to be on our A-game. But if we can get the result we’re looking for then we can hopefully get some momentum, get some confidence back in the boys and another week and we’ll be back in Dublin for the double-header.”

1 Born to ride, born to win: Sam Bennett, the making of a green machine
2 Leinster look ready to step things up and burn off Saracens challenge
3 Keith Duggan: Surreal story of John Delaney needs to act as a wake-up call for FAI
4 Will 'Porridge' Connors now delivering on his massive potential
5 Michael Walker: Gareth Bale’s place in Real’s history a strange type of glory
Real news has value SUBSCRIBE

Girls in green: meet the Irish women’s soccer team 10:29
Let’s face it, Saracens don’t really care that they are rugby’s most hated team 08:00
Michael Walker: Gareth Bale’s place in Real’s history a strange type of glory 07:00
Super League influx of world stars not no super for Vera Pauw’s Irish plans 07:00
Leinster look ready to step things up and burn off Saracens challenge 06:00
Crossword Get access to over 6,000 interactive crosswords