Francois Steyn has appeal against four-week ban turned down 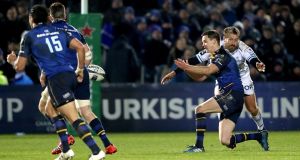 Montpellier outhalf Francois Steyn has had his appeal against a four-week ban for a dangerous tackle on Jonathan Sexton turned down.

The South African-born player was given a four-week ban at his initial disciplinary hearing following a high tackle on his Leinster counterpart during the Champions Cup game at the RDS in January. Steyn received a red card for the tackle.

An independent Appeal Committee heard submissions by conference call on Wednesday before upholding the original penalty.

Steyn will be eligible to play from Monday March 6th.

1 Mohamed Salah double sees Liverpool clip Brighton’s wings
2 Roger Federer: The balletic genius whose greatness goes deeper than numbers
3 Tipping Point: DeChambeau’s transformation raises questions, but who will ask them?
4 John Egan the hero for Sheffield United against Wolves
5 Monica Seles: The warrior queen who could have been the best ever
Real news has value SUBSCRIBE