Organisers announce number of partnerships during ‘soft launch’ in Dublin 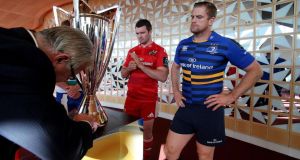 Munster’s Peter O’Mahony and Leinster’s Jamie Heaslip take a look at the new European Rugby Champions Cup during the launch at the Convention Centre in Dublin. Photograph: Dan Sheridan/Inpho

European Professional Club Rugby (EPCR) staged what approximates to another ‘soft launch’, at least for the Guinness Pro12 clubs, of the European Rugby Champions Cup and the European Rugby Challenge Cup tournaments which begin next week, with the unveiling of two new trophies and a little bit of housekeeping in Dublin this morning.

The commercial partnerships have been announced in dribs and drabs, Gilbert to be the ball sponsors, Canterbury to provide the referees’ jerseys, Google and You Tube to act as social media partners, while yesterday, Heineken, the title sponsors of the tournament in its previous incarnation, were confirmed as a founding partner in sponsorship terms.

EPCR are hoping to have five commercial partners in place but that won’t happen in all probability by the end of this season. Paul McNaughton, vice chairman on the executive committee of the EPCR, pointed out that they were determined to maximise revenues in every type of commercial market and that it was important not to undersell the value of the tournament on the basis of accepting the first offer just to have more partners in place in the short term.

He also confirmed that the venues and times for rounds three and four of the tournaments to be played in December will be announced publicly by the end of the week, having first gone to the clubs tomorrow. The delay was primarily down to concluding a broadcasting deal with France Televisions that will allow them to screen 18 matches over both competitions free-to-air.

They join Sky Sports, BT Sport, Sky Italia and BeIn Sports as the television rights’ holders. No terrestrial television company in Britain and Ireland have the right to broadcast live matches, a state of affairs that has pertained for the past decade.