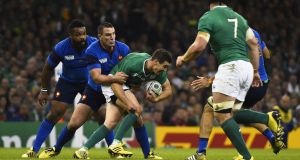 There is no obvious ‘Pool of Death’, but the four Irish provinces face a tall order to qualify

It is four years since Leinster won the then Heineken Cup when they beat Ulster in the final at Twickenham in 2012 and the bookmakers are suggesting that they won’t bring that run to an end in next season’s Champions Cup final, which will take place at Murrayfield, following yesterday’s pool draw for the tournament.

The 20 teams have been split into five pools of four teams with the pool winners and the three best runners-up going on to dispute the quarter-finals.

The fixtures, which take place over two weekends in each of October, December and January (2017), will be decided later in the summer after the clubs, the organisers and the television companies sit down to thrash out the schedule.

Leinster and Ulster are both in pools containing two French clubs, Connacht have Zebre, while Munster find themselves alongside French champions, Racing 92, Glasgow Warriors and Leicester Tigers.

Paddy Power are offering odds of 12-1 for there to be an Irish winner in next season’s Champions Cup following the draw.

The bookie makes holders Saracens their 11-4 favourites with Toulon and Racing 92 considered their closest rivals at odds of 4-1 and 5-1 respectively.

Leinster are the shortest priced Irish team at 33-1 followed by Ulster at 40-1 and Munster at 50-1. Connacht, who upset the odds to win last year’s Pro 12, have been handed chunky odds of 100-1 to add the Champions Cup to their trophy cabinet.

Overview: Munster faced the Leicester Tigers twice during the pool stages last season and were beaten 31-19 at Thomond Park and 17-6 at Welford Road while the English club were the first to beat them at their Limerick citadel during the 2006-2007 season. The Tigers also beat Munster in the 2002 final at Twickenham.

The last time Munster faced the current French champions Racing 92 was in the 2012-2013 season, beating the French side at Thomond Park 29-6 but losing 22-17 in Paris.

Ronan O’Gara’s return to his native province as Racing defence coach will be eagerly awaited.

Overview: The newly crowned Pro12 champions Connacht famously beat Toulouse 16-14 in the Pink city two years ago before losing 37-9 at home the following week. Ugo Mola will be in his second season as Toulouse coach.

The four time European champions’ recruitment hasn’t been stellar so far. Scotland and Lions second secondrow Richie Gray moves from Castres, wing Sofiane Guitoune has been recruited from Bordeaux while the other new faces include Italian hooker Leonardo Ghiraldini and for all you Leinster rugby buffs out there, Maks van Dyk, the South African-born prop who enjoyed a short-term contract with the Irish province.

Zebre will be targeted by the pool sharks.

Leinster and Northampton Saints have met on numerous occasions including the 2013-2014 season when the Irish province thumped Saints 40-7 in a pool match at Franklin’s Gardens only for the English club to prevail 18-9 at the Aviva stadium the following weekend. Leinster famously beat the Saints in the 2011 Heineken Cup final.

Northampton have signed French colossus Louis Picamoles – he has a little previous history with Jonathan Sexton – from Toulouse, Nic Groom from the Stormers and Campese Ma’afu from Provence. Alex Corbisiero has taken a year out from rugby while Kahn Fotuali’i has left.

Leinster played Montpellier the last time they won the European Cup in 2012 drawing 16-16 with a late penalty in France before winning the game at the RDS 25-3.

The French club, under the coaching baton of Jake White, already have a substantial South African presence including the Du Plessis brothers, hooker Bismarck and prop Jannie, but that number will increase with the arrival of Tiaan Liebenberg (Cheetahs) and Nico Janse van Rensburg (Bulls). But the marquee signing has to be Fijian wing Nemani Nadolo who joins from the Crusaders. French centre Alexandre Dumoulin is on his way from Racing 92. Francois Trinh Duc has gone to Toulon while four of their French internationals including Nicolas Mas and Thibaut Private have retired.

Leinster have beaten Castres five out of the six times they have played and there has been a significant turnover in playing personnel at the club.

Leinster coach Leo Cullen will definitely be adding to a modest influx of Robbie Henshaw, Jamison Gibson-Park and Ian Nagle in the coming months. Eoin Reddan, Kevin McLaughlin and Luke Fitzgerald have retired, Ian Madigan, Ben Te’o, Marty Moore and Cian Kelleher are just some of those that have moved on.

Montpellier will start as warm favourites.

Overview: One individual sub plot to this pool with be Ian Madigan (Bordeaux-Begles) squaring off against Paddy Jackson (Ulster). The French club have lost a number of players including Argentine Francisco Gomez Kodela, French international Sofiane Guitoiune (Toulouse), Sekope Kepu (Waratahs) and Pierre Bernard (Toulon) while outside of Madigan their man signing so far is Luke Jones of the Melbourne Rebels, who joins compatriot Adam Ashley Cooper at the club.

Exeter Chiefs, runners-up in the Aviva Premiership, have bolstered the Australia contingent at the club with Lachlann Turner, Dave Dennis and Greg Holmes while Ollie Devoto has joined from Bath. They have made Sandy Park such a difficult place to win for visiting teams while they can prove a real handful for teams on the road.