Anthony Foley does not see any dead rubbers for Munster 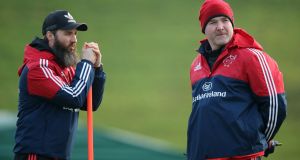 The result certainly matters to Anthony Foley who has had to do something alien to his nature: constantly give reasons for some inept Munster defeats in a public forum.

“Last season we lost the Pro12 final and did not get out of our group in the Champions Cup,” Foley explained. “We have lost big games this season too and we have to make sure we learn from those lessons.

“We are our own harshest critics, we have a stable environment but we are building a new team and this group is growing.

“Everyone turned up for one another against Stade and we know our supporters will always be right behind us. Now we want to try and finish things on a high.”

Injuries aside, it looks like a full squad with perhaps the selection of Dave Kilcoyne over Cronin at loosehead a nod to the higher power. The latter has been called up to Ireland’s Six Nations squad, the former has not.

Mark Chisholm is nudged out of the side by Donnacha Ryan, who is seeking a performance that allows him partner Devin Toner in the Irish secondrow come the Six Nations.So it definitely matters.