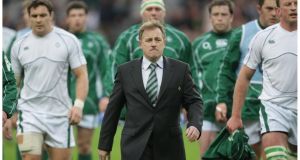 Eddie O’Sullivan will take over as head at recently relegated Biarritz Olympique, who have lost their status in the French Top 14 for the first time in 18 years.

The former Ireland coach has accepted a two-year contract. The French club contacted O’Sullivan about three weeks ago at a time when he was also being considered for the position as backs’ coach under Anthony Foley; the latter takes over as head coach from Rob Penney at the end of the season.

He was also shortlisted for the Cardiff Blues and Gloucester jobs. O’Sullivan interviewed for the Munster position but this week decided that his future lay with Biarritz after discussing the options with his family.

The 55-year-old Irishman was identified by the French club as possessing the technical expertise to try and ensure that the club’s Pro D2 status will be for the briefest possible period.

O’Sullivan took over as Ireland coach - he was previously assistant coach with responsibility for the backs for two years from 1999 - from Warren Gatland in 2001 anbd went on to lead the national side to three Triple Crowns in 2004, 2006 and 2007.

During his tenure Ireland were unfortunate to miss out on a couple of Grand Slams with the French being a particular nemesis. He also presided over two World Cup camaigns in 2003, when Ireland lost to France in the quarter-finals, and 2007 when they finished third in the pool behind the French and Argentine teams.

He resigned as coach after a disappointing 2008 Six Nations campaign and was succeded by his former assistant coach, Declan Kidney. O’Sullivan was appointed coach of the US Eagles - it was a familiar role as he’d fulfilled a similar remit, albeit as assistant coach, prior to taking up with Ireland.

At the 2011 World Cup in New Zealand, he coached the American side that lost to Ireland in the opening match of the pool stage. The Youghal born former Munster and Garryowen wing will relish the opportunity to get back to the daily coaching regime.