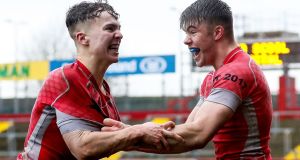 After 46 years of trying Glenstal Abbey booked their place in the Munster Cup final for the first time since 1970 with a one point win over Ard Scoil Ris at Thomond Park on Thursday.

The jubilation at the finish was understandable - but spare a thought for the contribution of Ard Scoil Ris in this thriller as they battled back from being 21 points to nil down after only 19 minutes.

The whirlwind start by Glenstal and the brilliance of their flowing rugby saw them hit the front after only three minutes. Five players were involved in a move that was finished by full back Jack O’Mahony.

Ben Healy landed the conversion and the outsiders were off to the perfect start.

Ard Scoil suffered another blow two minutes later when Ian Browne was injured and was replaced by Sean Hanley.

Despite the slippery conditions Glenstal continued to move the ball about. A break down the left by Ronan Quinn culminated with hooker George Downing barging over and Healy landed the difficult conversion from nine metres inside the touchline to make it 14-0.

Try number three was as the result of another superb piece of play involving five handlers before Luke Fitzgerald sprinted over and again Healy converted.

But Ard Scoil Ris are noted for never surrendering and they got back into the game after 27 minutes. Glenstal were penalised ten metres out and Craig Whelan opted to take a quick tap which ended with a touchdown by Alex O’Callaghan - which Craigh Casey converted.

A splendidly taken drop goal by Evan Cusack left it 21-10 at halftime.

Nobody anticipated that Glenstal would not score again but Ard Scoil continued to pile on the pressure. A left footed Casey penalty two minutes into the second half narrowed the gap further.

Both sides had a player binned within three minutes of each other. The drama intensified when Colin Slater scored after he blocked down an attempted clearance to set up the dramatic finish -but Glenstal held on to book their place in the decider against PBC at Thomond Park on St Patrick’s Day.