Division 1A leaders UCD too strong for Old Belvedere 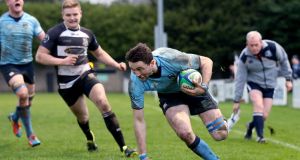 Division 1A leaders UCD had the measure of local rivals Old Belvedere for the third time in recent weeks, as a three-try salvo steered the students to a terrific 23-6 Ulster Bank League victory at Anglesea Road.

Ireland Under-20 prop Andrew Porter raced clear in the final play to seal UCD’s fifth win on the trot, adding to their league and Leinster Senior League Cup final successes against Belvo from last month – 20-12 at Belfield and 23-13 at Donnybrook.

The difference at half-time (13-6) was a fine try from UCD’s superb flanker Peadar Timmins who took a great line to dive over by the posts.

James McInerney struck for the only try as Garryowen defeated Clontarf 10-3 at Dooradoyle. The result moved Conan Doyle’s charges up one place to third in the table, just five points behind ’Tarf who trail UCD by three.

Lansdowne got their league season back on track with a 29-24 bonus point triumph over bottom side Ballynahinch. Elusive winger Ian Fitzpatrick had a try double and captain Scott Deasy and young lock James Ryan also scored tries.

Tomás Quinlan contributed 12 points off the bench, including the bonus point try, as Cork Constitution ran out impressive 32-22 winners over Terenure College at Lakelands Park.

Meanwhile, a late Will Leonard try was not enough for Shannon to prevent Dublin University from leaving Limerick with a 25-22 victory. Tries from Tim Maupin, captain Nick McCarthy and Tom Ryan secured d Trinity an eighth win in a row.

A 38-13 bonus point win at home was a fitting way for St. Mary’s to pay tribute to departing head coach Peter Smyth as they completed a season’s double over Belfast Harlequins.

Smyth, who is leaving to manage the Leinster Rugby Academy, watched the Division 1B leaders tally up five tries, including two from impressive number eight Mark Fallon.

Blackrock College staged a gritty two-try comeback to squeeze past Dolphin 14-13 at Stradbrook, with a touchline conversion from outhalf Peter Quirke proving crucial.

Winger Rory O’Connor weighed in with a try on either side of half-time – taking his league tally to eight overall – to guide Buccaneers to an 18-7 win against UL Bohemians at Dubarry Park.