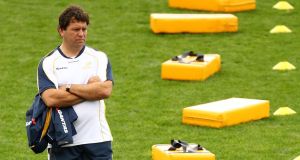 David Nucifora during his time on the Wallabies’ coaching staff. “I always think that dealing face to face with people is a far better way of doing things,” he says. Photograph: Mark Nolan/Getty Images.

Along with significant control over national player contracts, Nucifora (52) insisted upon the creation of a men’s Sevens squad before agreeing his initial five-year term.

Deal breakers both, so the committee men ceded, ensuring that the Brisbane native possesses both the power and control to finally modernise Irish rugby.

Skip to last August in Marcoussis, outside Paris. Nucifora is sitting beside Sexton, his wife Laura and son Luca as Ireland beat New Zealand in the women’s World Cup. Joe Schmidt, who had already established a one-two working relationship with Nucifora when coaches at the Auckland Blues, joins them later.

“I always think that dealing face to face with people is a far better way of doing things,” Nucifora said. “The more we can personalise the process, the better chance you’ll have of a positive outcome.”

“It won’t always be the case, but I do think that if you can try and manage to do that it probably takes a lot of the prickly things out of what is not always an easy process.”

A four-year deal was inked, guaranteeing the return of Ireland’s most important player to Leinster next July.

Nucifora coached the magically gifted ACT Brumbies team that won the 2004 Super Rugby title and was released soon after. That brought him into Schmidt’s world for three tough, educational years in Auckland.

“It was an influence on me taking this job, because I rate Joe very highly, he’s a very good coach, very well organised, and that’s important.”

After the 2007 World Cup, Nucifora sought the Wallabies head coaching position. Robbie Deans, the successful Crusaders coach, was to replace Graham Henry at the All Blacks helm but the NZRU broke their ruthless streak by keeping faith in Henry. Deans got the Wallaby gig and Nucifora eventually, in 2009, became general manager of Australia’s High Performance unit. He also coached the under-20s at a world cup.

Only capped twice by Australia at hooker, he was among the squad that extinguished a blazing Lansdowne Road in October 1991. Old Ireland.

“That’s not for us to decide,” said Nucifora, strangely. “I mean, what we do is we deal with contracting players, and if the player has a high enough profile then they will attract their own sponsors.

“We don’t facilitate or seek to facilitate any of those things,” he said. “That’s purely what they can do for themselves on the side. There’s probably not a lot of guys out there who can drive that sort of external financial interest. Probably only a handful.”

The questions wouldn’t let up, so he added: “I don’t think anyone’s going to deny that it helps a player make a decision to stay here, but I would say that in my discussions with players it’s certainly not the only thing.”

The Nucifora message is that a player can add “two, three, four years” onto a career by avoiding the Top 14 slog. “They’ll quickly do the maths and convert that into money, then I think that comes into the equation for them as well.

“So, yeah, private money, if they’re good enough to get it, that’s great, it’s helpful, but it’s not the only factor.”

This is just the start of a root and branch assessment . A lean towards skills development rather than “competition heavy” attitude, particularly evident in rugby schools, requires the rattling of archaic cages.

“I’m not trying to change anyone’s mindset just yet,” he said. “What I am trying to do is make sure that we look at every single competition, and what structures are in place, and then make a judgement on whether they are right or not.”

The spread of talent more equally among the provinces, to ensure maximum exposure and development, is also high on Nucifora’s agenda.

“Yeah, it’s something people asked me right at the start. I have a better understanding now, I think. I still don’t have the answers to it.

“Sure we want to see the best players playing as much rugby as we can possibly get them playing at the top end of the game. But then you look at scenarios and you say, okay, would it be fair for us to go to Leinster and say you guys are supplying whatever it is, 55 to 60 per cent of the players to the national team right now, so obviously they need back-up to be able to do their job too. We have to take that into consideration.

“At the same time, we don’t want to see who we believe is a quality player sitting in a tracksuit in the bench and not getting enough footy. So it’s a balancing act between the two.

Decide yourself what province Nucifora means.

Wexford’s Joe O’Connor ready to pick up where he left off 01:00
Liverpool maintain perfect start with win over Arsenal 22:12
Hourihane gives Kenny a nudge as Aston Villa sweep past Fulham 20:05
Rafael Nadal up and running as he bids for 13th French Open title 20:23
Positive omens for Kenny ahead of Ireland’s Slovakia clash 22:09
Crossword Get access to over 6,000 interactive crosswords