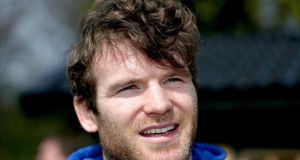 Gordon D’Arcy: The centre knows defence will be important against Biarritz. Photograph: Inpho

It may seem odd that a venerable war horse like Gordon D’Arcy is dipping his toe into the Amlin Challenge for only the second time after a try against Wasps last round. Europe is Europe is the attitude. That and also to become the first side to claim three European trophies in consecutive seasons.

This week’s journey against Biarritz will bring a continental vibe and a platform for Leinster to demonstrate their wares and even a possible fanfare for Schmidt’s departure.

“Ah it does, yeah. It does feel like a European week,” says D’Arcy. “Having that home crowd, it may not be the European trophy we want but we wanted a European trophy this year and having that massive card of playing a semi-final and a final at home was a big drive for the Wasps game.”

The reality is that when Connacht was involved in the play-off stages a few years ago it wasn’t met with the same passion or vim as strutting Leinster bring this week. When two aristocrats of Europe duel, people watch.


‘Good buzz’
“There is three times the amount of media here and there is that little bit of tension around the squad, unless somebody does something to lighten it,” he adds. “There is definitely a good buzz around the place, no doubt about it.”

The match could be the last time D’Arcy plays in Europe with O’Driscoll depending on what decision the outside centre makes in July about his future. The two may have broken a world record at the 2011 World Cup with their enduring partnership (45 appearances) but even assumptions about who will line out is met with caution.

“One of the things you will always hear said about Joe is his man management of players and whoever is lucky enough to get the jersey knows he has earned it,” D’Arcy explains. “The other guy knows that Joe will have told him a couple of ways to get back into the team.

“Everybody accepts it and that is one of the reasons why this group of players is so close and able to play well together week in and week out. We are able to accept stuff at face value and we know that Joe is always being honest with us and always trying to push that guy to get the jersey back.

“As a player the one thing you want is honesty. When you know a coach is being honest with you week in and week out you can walk away . . . you may not like the answers but at least you know it is the truth or at least his perception of the truth and you know what parameters you are working within and how you can affect his vision of you.”

Dimitri Yachvilli, Damian Traille, Benoit August and Imanol Harinordoquy, Biarritz have their own weathered players who are still shaping matches. D’Arcy has played them all and while they currently sit 11th in the French league suggesting a faltering season, he knows that’s a false premise going into a semi-final. A Leinster defence tighter than it in the last few outings is an imperative.


‘Take our chances’
“We know our defence hasn’t been up to scratch in the last two or three games. It’s at the forefront of everyone’s mind, especially in Europe where defence can be the winning or losing of it. The best way to look at it is to keep them out and take our chances.

“Generally the rule is that the further along you get the tighter the game is so the 40-yard pass that Dimitri Yachvili threw over the top may not be thrown this week but you never know. We know they definitely like to play rugby. You wouldn’t look at the last game just gone because they rested most of their team but the previous two games to that you wouldn’t say they were in rag order.”

Two games left for a European Trophy. Any team will rise to that. D’Arcy expects Biarritz won’t let the moment pass.

1 Connell losing touch with the club championship is the real tragedy of Normal People
2 Ghosts and goalposts: The soul of street football in Dublin’s Gloucester Diamond
3 Shane Ryan: Shark attacks and gruelling shifts on a Covid-free Atlantic mission
4 Rugby clubs in crisis: ‘I fear a lot of players won’t go back playing at all’
5 Michael Walker: Fans wish to be supporters, not spectators. There’s a difference.
Real news has value SUBSCRIBE