Rugby scrambles for plan B to complete 2019-20 season 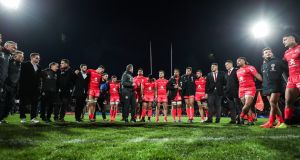 Toulouse may miss out on next season’s Champions Cup. Photograph: Billy Stickland/Inpho

This season’s Heineken Champions Cup cannot now be completed in July or August after the French prime minister Édouard Philippe ruled out “big sporting affairs” taking place in the country before September.

With Clermont, Racing 92 and Toulouse, who were due to host Ulster, all having reached the quarter-finals of the Heineken Champions Cup, and three more French sides having reached the same stages of the European Challenge Cup, this means both competitions cannot be resumed until September at the earliest – and if at all.

However, the governing body of the two competitions, European Professional Club Rugby (EPCR), will not rule out completing the 2019-20 knockout stages in September or, if ultimately possible, staging the finals in October.

Indeed, now that shoehorning a finale of sorts into the 2019-20 Top 14 season (which still had nine full rounds of fixtures and three knockout rounds to complete) is no longer an option, this development could ultimately work to the benefit of the European competitions, if the various stakeholders agree to find two or three weekends to run off the 2019-20 knockout stages come September.

By implication, this applies to the rugby season as well. The board of the umbrella group for the Top 14, and Pro D2, in France, Ligue Nationale de Rugby (LNR), were to meet in the aftermath of Philippe’s speech, while the Top 14 club presidents will hold a conference call on Wednesday.

It has already been decided to call off the Pro D2 and promote the top two, Colomiers and Perpignan, into a Top 16 for next season only, while the likelihood now is that the current top six in the Top 14 – Lyon, Bordeaux-Bègles, Racing 92, Toulon, La Rochelle and Clermont – will qualify for the 2020-21 Heineken Champions Cup, with seventh-placed Toulouse, the four-time winners, missing out by a point.

Since Racing won the first French Championship in 1892, the only years in which the competition did not take place were in the first and second World War years. The one realistic option for completing the 2019-20 French Championship now appears to be a final between the top two, Lyon and Bordeaux-Bègles, in September, whether behind closed doors or open to the public.

Ultimately, of course, the European competitions’ cross-border element still makes it highly unlikely they will be completed. But one grain of hope for EPCR in completing the Champions Cup and Challenge Cup is that neither Lyon nor Bordeaux-Bègles reached the knockout stages in Europe. The European quarter-finals could thus, in theory as things stand, be run off on the same weekend as a French final.

There remain so many moving parts to the global rugby calendar for 2020 that forecasting how things might pan out is still impossible. For example, pending the inevitable postponement of the July tours by the northern hemisphere countries, it remains to be seen if there will be any international rugby at all in 2020 and, if so, how it may or may not dovetail with the club/provincial game.

With all this in mind, weeks ago World Rugby appointed a workshop to look at various contingency plans and have been holding weekly conference calls with some or all of the various stakeholders, including the Tier 1 countries, the LNR, Premiership Rugby, EPCR and the International Rugby Players association, in what was hailed as a new-found spirit of harmony.

Although, as proven again by the French decree, government pronouncements overrule those of all sporting bodies, World Rugby is not of a mind to confirm the postponement of the July tours (including Ireland’s two tests in Australia) until it has an alternative in place.

It is understood that Plan A, in that scenario, would be to effectively shift the July tours from that window to the northern hemisphere in October as a lead-in to the traditional November tests, all of which would be preceded, or followed by, the outstanding rearranged games from the 2019 Six Nations, including Ireland’s matches at home to Italy and away to France.

That looks like a decidedly long shot, given the possibility of intercontinental travel looks remote at best, never mind the restrictions which might be applied.

Plan B would be for the two hemispheres to go their separate ways for the rest of the year, and those rearranged 2019 Six Nations games would be a forerunner to a one-off, 15-game tournament in its own right or part of a home-and-away 2021 Six Nations.

The alternative, as World Rugby chairman Bill Beaumont recently admitted, is that there will be no professional rugby of any hue until at least 2021.

In any event, that spirit of harmony appears to have waned as quickly as it surfaced. Both EPCR, in chairman Simon Halliday, and Premiership Rugby, through Bath owner Bruce Craig, have publicly expressed their opposition to World Rugby shoehorning Test rugby into the October window.

Furthermore, all of these moving parts are being played out to the backdrop of an election for World Rugby’s chairman between Beaumont and Agustín Pichot, which has accentuated the traditional northern-southern hemisphere divide.