Captain O’Connell the only Irishman in Lions starting 15 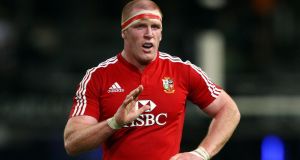 Paul O’Connell will seal his comeback from serious injury when he captains the British and Irish Lions in Saturday’s tour opener at Hong Kong Stadium. Photograph: David Davies/PA Wire.

As expected, Paul O’Connell will lead the Lions in their opening tour match against the Barbarians in Hong Kong this Saturday in place of the stricken Sam Warburton, whose medial ligament injury has required an injection.

With a requisite eight day rest to follow, this must cast Warburton’s place in the team to play the Western Force next Wednesday in some doubt, in which case another former Lions tour captain, Brian O’Driscoll would be a prime candidate to lead the side.

With Seán O’Brien, Dan Lydiate and Gethin Jenkins also ruled out of this Saturday’s game, the ripple effect means that, all told, three of Leinster’s double-winning contingent have been named on the bench this week, namely Cian Healy, Jamie Heaslip and Jonathan Sexton.

That trio would only have joined the rest of the squad in training this past week, following on from last Saturday’s Rabo Pro12 final win over Ulster, and given the near certain need for refreshments off the bench in such climactically demanding conditions this Saturday, all can expect to see about 20 minutes or more of action.

“It was pretty easy for me” said Warren Gatland regarding his choice of captain for the tour opener. “It wasn’t difficult. He’s been great the last few weeks around the squad and it was a bit of a blessing for me that Munster got knocked out so we could bring that experience into the team. He’s done a great job supporting Sam and giving us some general leadership.”

“I’m delighted, it’s a very exciting occasion,” said O’Connell in the Lions’ team hotel today. “We’ve had a few great weeks and it’s gone up another level since the Leicester boys and the Leinster boys came in, so I’m thrilled.

Earlier in the season, O’Connell had publicly ruled himself out of making this summer’s tour. “Yeah, I suppose around Christmas and two or three months after Christmas I certainly thought I wouldn’t be here, so to be here and now captaining the side is fantastic and I’m delighted.”

In such stifling heat and humidity, O’Connell admitted training had been tough. “It’s not ideal and we wouldn’t be a whole lot used to it but neither would they. But even today, guys were talking when we came out, we did weights today and were walking around the city trying to find our bus for a while, and the lads were saying they actually found it easier today already and getting used to it already.”

“I think all of us have experienced it once stage or another down through the years and it’s never as bad as you think it’s going to be. So it is what it is, we both have to deal with it and hopefully we can deal with it better than they can.”

1 Gordon D’Arcy: Digging deep only recipe for Twickenham success
2 Robbie Henshaw and Bundee Aki to lead from the centre
3 Jurgen Klopp: ‘welcome to Anfield, it’s not over yet’
4 Kieran Donaghy calls for GAA to shut down fans’ forums
5 Seán Moran: GAA in trouble if sectional interests not accountable to rules
Real news has value SUBSCRIBE