Astronomical scores threatened to break the laws of physics

The Irish rugby team recieve a hero's welcome as they arrive back into Dublin Airport after their Six Nations win. Video: Ronan McGreevy

Reaction from inside Murrayfield as Ireland lift the Six Nations trophy. Ireland were made to wait through a nervy ending to the England v France game. 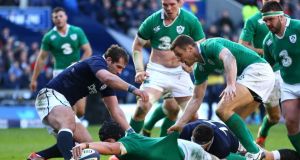 Ireland scored early and often against a Scots defence of less than Calvinist virtue to win by 30. Photograph: Richard Heathcote/Getty Images

First a solar eclipse, then the spring equinox. After that, on a weekend of celestial drama, Irish rugby fans witnessed a spectacle most of them had never seen before: a Six Nations trophy with green ribbons on it being hoisted into the skies for a second year running.

Successful Irish defences of the title are almost as rare as visitations from Halley’s comet. The last such alignment was 66 years ago when the Six Nations was still only the Five Nations. You’re lucky if you see two such events in a lifetime.

Saturday’s thrilling draw between day and night (12 hours each) proved to be the only close result of the weekend. Yet for all the wide margins, the denouement of the men’s 2015 championship may go down as the greatest day in the competition’s long history. Critics of the staggered ending – the three games strung out to provide a day-long feast of television – must themselves have been staggered by the resultant theatrics.

The 21-point target thereby set Ireland looked difficult if not impossible. But that was before the Celtic love-in in Edinburgh continued the mood of abandon, as Ireland scored early and often against a Scots defence of less than Calvinist virtue to win by 30.

By now, however, it was obvious that the Anglo-French affair in Twickenham would be the rugby equivalent of a house party co-hosted by Dominique Strauss-Kahn and the Marquis de Sade. Sure enough, they went at it like wild animals, producing 80 minutes of frenzied action that left spectators breathless.

Amid all this Francophilia, we somehow forgot the team in blue weren’t playing for us. To gasps of astonishment, they then ran the ball from their own line, to give England yet another chance. Luckily, South African-born Rory Kockott realised the true significance of France’s heroic 20-point defeat and booted the ball into the stands, putting Irish fans out of our agony.