Caelan Doris will be unavailable for ‘foreseeable future’ 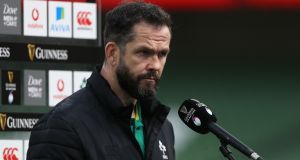 Although there have apparently been some encouraging test results regarding the well-being of Caelan Doris since he returned to Leinster, Andy Farrell has strongly intimated that the 22-year-old backrower will not be featuring in the 2021 Six Nations by revealing that the player will be unavailable for the “foreseeable future”.

Doris had been named in the original 37-man squad for the tournament but was withdrawn and redirected back to his province after reporting symptoms that could be associated with concussion.

In admitting that Ireland would be without Doris for “the foreseeable future”, Farrell said: “Caelan is getting well looked after, seeing the right people, getting the right advice and making sure he’s comfortable on his return to play. That’s still in process but we don’t intend to see him back any time soon.”

Otherwise Farrell had positive news on the injury front, as he expressed confidence that Johnny Sexton and James Ryan would be fit to train next week in advance of the game against Italy in Rome. Both players missed the 15-13 defeat by France last Sunday when failing to complete their return-to-play protocols following the head injuries they sustained in the opening loss against Wales.

Ireland’s head coach re-iterated that he will pick what he regards as his strongest selection, most likely meaning returns for Ryan, Murray and Sexton.

While this was balanced with a longer term view, it was clear that the most pressing need was to win in the Stadio Olimpico.

“You always take a big view, you always do that in the forefront of your mind but you certainly have to concentrate on the here and now. I think if you look at the context of what’s happening for us, you’ve got to look at the balance of our squad and the game-time people have had, and what’s coming up with the fallow week, and then another game, and another fallow week and some of these guys might not have played for five or six weeks so there’s all sorts of things that have to come into it.

“But first and foremost for me is doing what’s right for the squad.”

After two defeats, and bearing in mind Ireland’s sole Six Nations defeat by Italy in 2013 proved to be Declan Kidney’s last match in charge, Farrell needs an Irish win in Rome although he batted away suggestions he is under pressure.

“I’ve dealt with it all my life. You either embrace pressure or you get buried by it. I enjoy it. It makes you feel alive. You know when you’re taking the gig on. I believe that if you’ve not got pressure in your life, it’s not worth living. It goes with the territory I suppose.”

Having reviewed last Sunday’s game, Farrell felt his team “controlled the game pretty well in the first half”. While Ireland seemed saddled with a restrictive kicking game from the off, Farrell pointed out: “the conditions didn’t look like it on TV but it was pretty wet out there to start with, and I thought there was quite a bit of good play, obviously not perfect.

“After 23 minutes we possibly had an opportunity to go 10-0 up. Is that a different game from thereon in? It possibly is. I think we lost a little bit of that control certainly at the start of the second half and we continued to try to chase the game a little bit instead of putting the ball in front of our forwards. I thought we managed the game not quite as strongly as we could have done in that second half and therefore didn’t create as many chances as we possibly would have hoped.”

Indeed, the bluntness of Ireland’s attack has probably been the primary worry so far, and while the head coach admitted he was “concerned” by how few points Ireland have scored he remains “pretty confident in where we are going.”

Looking ahead, Farrell said: “The biggest thing for me is our game understanding and at the same time understanding where the space is. Like I keep saying to you boys, and I ain’t trying to make this complicated at all because it isn’t complicated but it is the run/kick/pass element as far as our decision-making is involved. Sometimes it is on to the front of you and sometimes it is on to the side of you,” he said, while stressing that there is less time in test rugby.

Irish players were, he assured us, given scope to play what they see.

“Again, we can’t complicate that. I don’t know a coach that has ever said to them, ‘don’t take an opportunity’. It’s showing the pictures constantly of what they need to be able to do to execute that is key for us.

“Gone are the days where it’s just up to the halfbacks to see those and it ain’t just up to the centres or the outside guys to do that. It’s a team issue and we all need to be on the same page regarding that.”

News of three positive cases of Covid-19 within the French squad, including head coach Fabien Galthié and more recently forwards coach William Servat, is a reminder as to how tenuous the Six Nations’ ongoing itinerary remains.

The cases in the French senior squad have been linked with an outbreak among the sevens team, who trained with them last week.

“We’ve all been thoroughly tested,” said Farrell. “We normally get tested twice a week. We had some down time on Monday and got tested in our own time there; all that has come back negative. The lads got tested again on Wednesday to come into camp and we are getting tested again on Friday so we are literally up to our noses in it as far as testing is concerned. We are doing everything we can to make sure we are doing the right thing.”